I took the photograph very late afternoon just before it went dark and she was one of a number of ships that I photographed before the sun set over Cowes and I headed back to the caravan I was staying in. 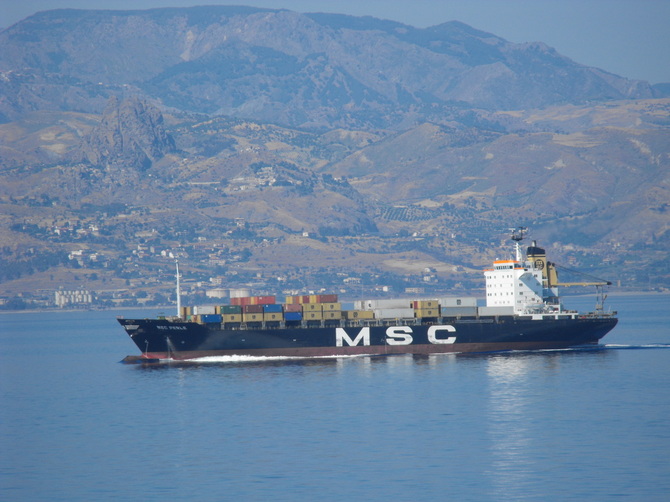 MSC Perle photographed heading towards the Straits of Messina on 2 June 2012, she was the last ship I saw before nightfall as we headed East along the South Coast of Italy on our way to Kusadasi in Turkey.

After leaving Civitavecchia we were at sea for two full consecutive days which was great, although I'm always up and on deck before dawn to see us entering port it's always a rush to get breakfast, get off the boat, find a taxi and go  exploring. When we have gone on trips far away from the port such as when we went from Civitavecchia to Rome by train there is always the worry that you might miss the ship sailing as we don't normally do any of the organised trips.  Days at sea mean that you can get up when you want and relax.

Since she was built she has had many names including:-

She is operated by MSC(Mediterannean Shipping Company) which is based in Geneva, Switzerland and
is one of approximately 445 vessels in their current fleet. The Company was formed in 1970 and is now one of the largest container carriers in the World and carried 13,722,000 TEU in 2013. 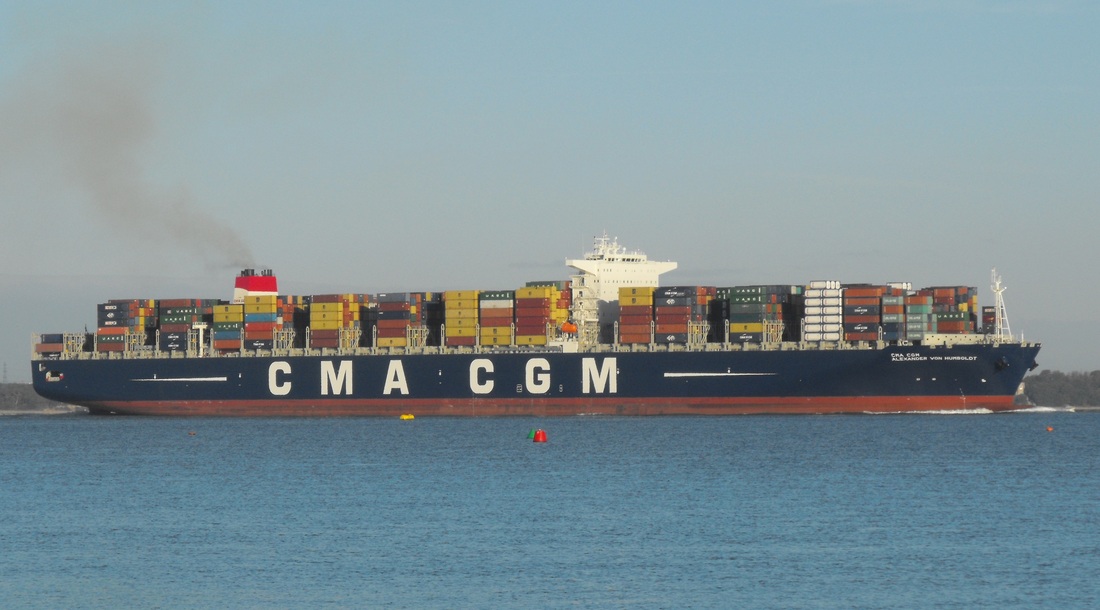 Photographed from the end of the Esplanade in East Cowes at about 8 am on 30 October 2013 CMA CGM Alexander von Humboldt is an Explorer Class container ship.

Built by DSME (Daewoo Shipbuilding and Marine Engineering) in South Korea, she is 396m long, 54m wide, with a draft of 16m and sails under the UK flag.

She is powered by a Wärtsilä-Hyundai 14RT-Flex 96C (80,080kW) engine with a single shaft and fixed pitch propeller giving her a top speed of 25.1 knots.

This vessel is the second in a series of three 16,000 TEU vessels all to be named after great explorers.

So who is Alexander von Humbolt?

Considered by many to be the father of Geography between 1799 and 1804 Humboldt traveled extensively in Latin America, exploring and describing it for the first time from a modern scientific point of view. His description of the journey was written up and published in an enormous set of volumes over 21 years. He was one of the first to propose that the lands bordering the Atlantic Ocean were once joined (South America and Africa in particular). Later, his five-volume work, Kosmos (1845), attempted to unify the various branches of scientific knowledge. Humboldt supported and worked with other scientists, including most notably, Aimé Bonpland, with whom he conducted much of his scientific exploration. 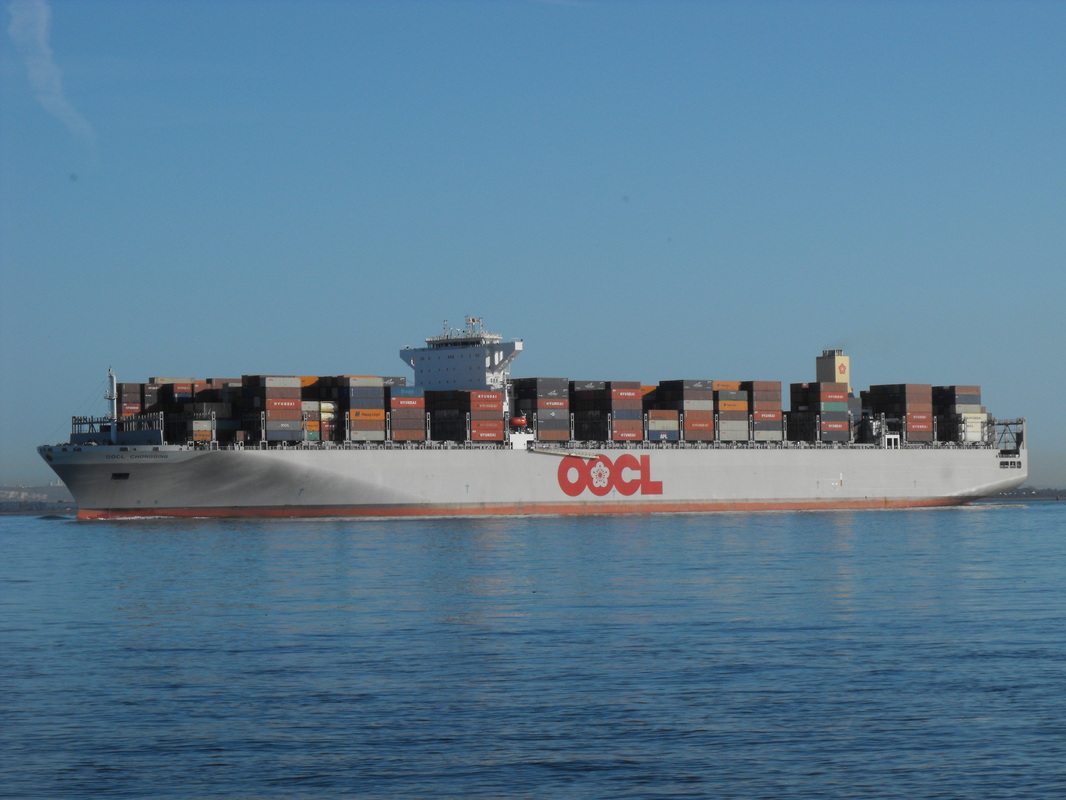 An early morning photograph of OOCL Chongqing en-route to Southampton taken from the end of the Esplanade in East Cowes before 8am on 30 October 2013.

After visiting Southampton her next port of call was Port Said.

She was christened at a ceremony at Samsung's Koje yard on 27 June 2013 and is the third 13,208 TEU containership that will be joining the company’s fleet this year.

Among the distinguished guests was the vessels sponsor Mr. He Guangbei, Vice Chairman and Chief Executive of BOC Hong Kong (Holdings) Ltd. and Bank of China (Hong Kong) Ltd., who performed the formalities to unveil the brand new ship.

The OOCL Chongqing will be serving the Asia-Europe trade on the Loop 5 service where her port rotation is: Kwangyang / Busan / Shanghai / Ningbo / Yantian / Shekou / Singapore / Suez Canal / Rotterdam / Hamburg / Southampton /  Suez Canal / Singapore and back to Kwangyang in a 77-day round trip. 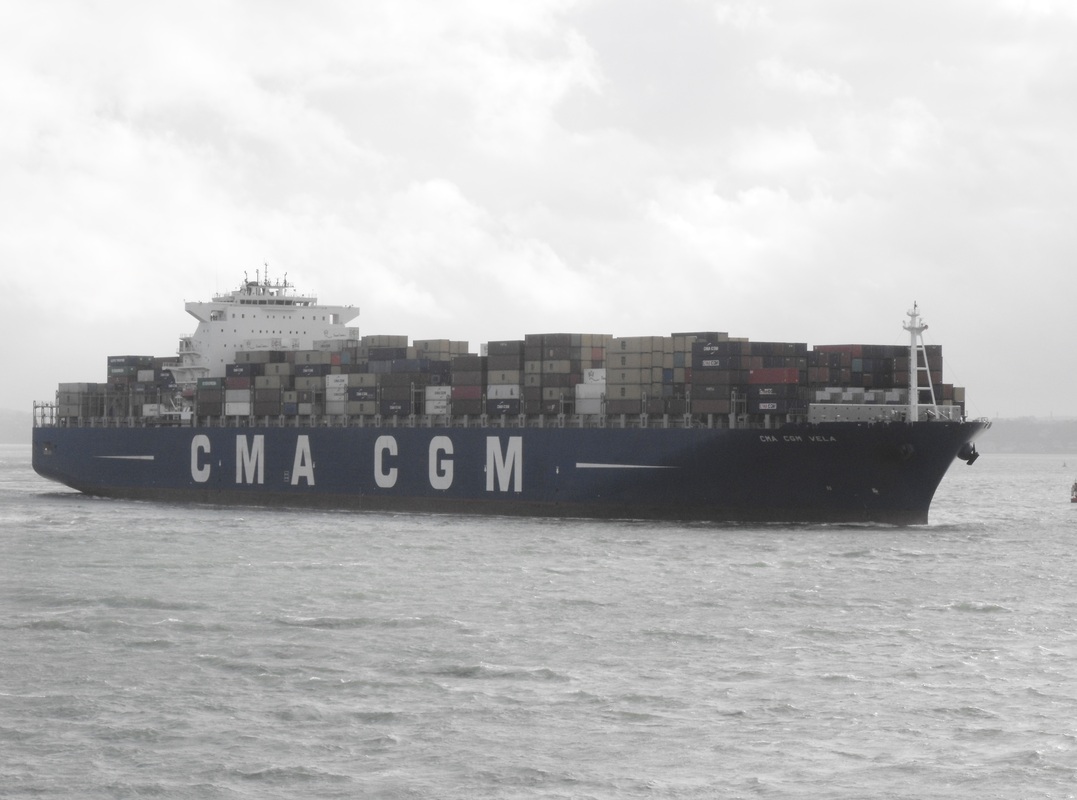 CMA CGM Vela photographed on the Solent inbound to Southampton from the deck of the Red Funnel Ferry on 26 October 2013.

She passed close to our ferry and to be honest my pictures do not do her justice.  It was also quite late in the afternoon, the sky was overcast and the light was not great which did not help.

She is currently one of 12 vessels employed on 'French Asia Line 3' which visits 18 Ports of Call in 83 Days. The itinerary for this circuit is noted below, this would make a brilliant ship spotting trip! 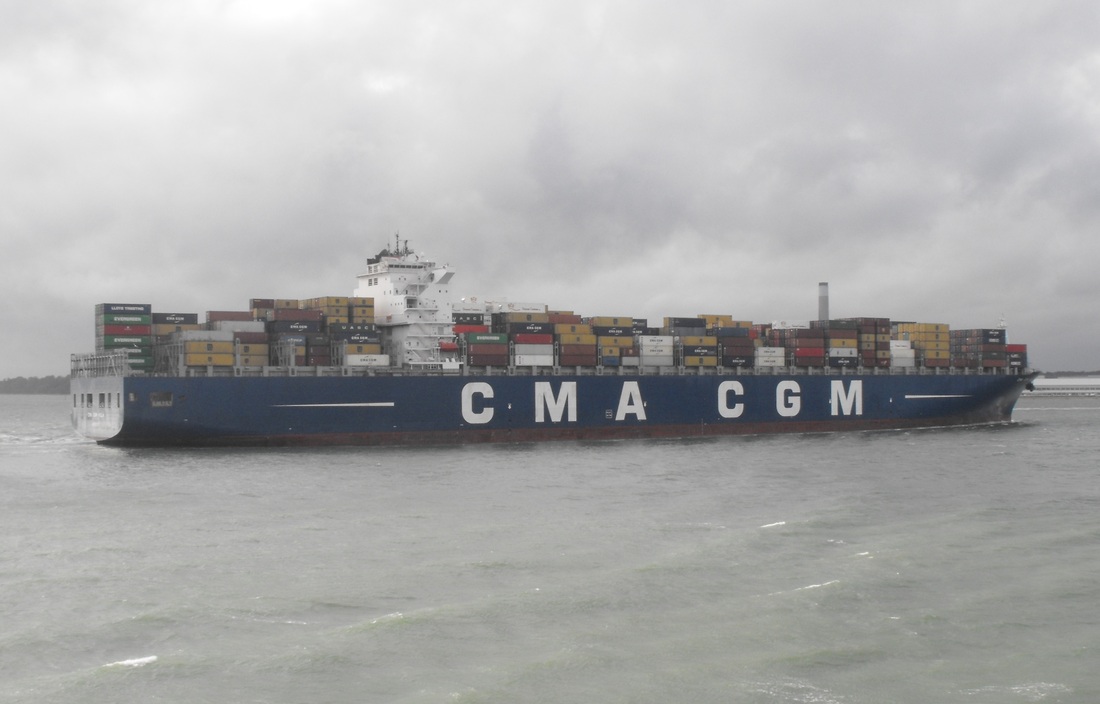 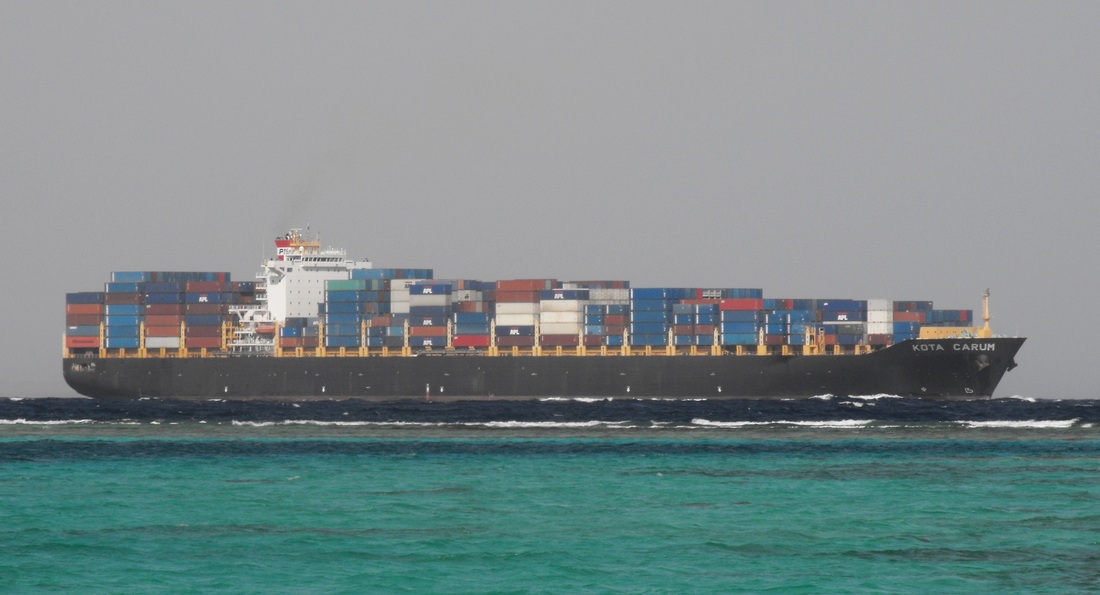 Registered in Singapore she was close on the heels of two French warships making use of the high tide.

Kota Carum is owned by Pacific International Lines (PIL) which started operations  in 1967 and has developed from a coastal shipowner/operator in Singapore to become one of the largest shipowners in South-east Asia. Today, it is ranked  amongst the top container ship operators in the world, offering container liner services and multi-purpose services at over 500 locations in 95 countries worldwide.

As of May 2013, PIL owns or operates a fleet of 166 vessels with 11 new container vessels, 1 new multi-purpose vessel and 2 bulk carriers on order for delivery by December 2014.

As a pioneer foreign shipping line that entered the China market in the 1960's, PIL presently offers its customers twenty container liner sailings a week out of China. It jointly owns and operates logistics centres in Ningbo, Shanghai, Wuxi and Xiamen. 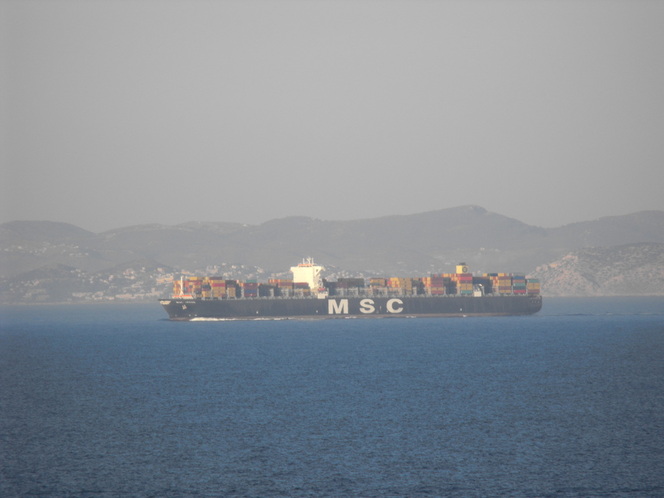 MSC Irene photographed at extreme range from the rear deck of the Serenade of Tthe Seas as we left the Piraeus and the Greek Mainland behind and headed to Santorini. I seem to remember that I was enjoying a few beers at the time after a full day exploring Athens.

She is operated by MSC (Mediterannean Shipping Company) which is based in Geneva, Switzerland and is one of approximately 445 vessels in their current fleet. The Company was formed in 1970 and is now one of the largest container carriers in the World and carried 13,722,000 TEU in 2013.