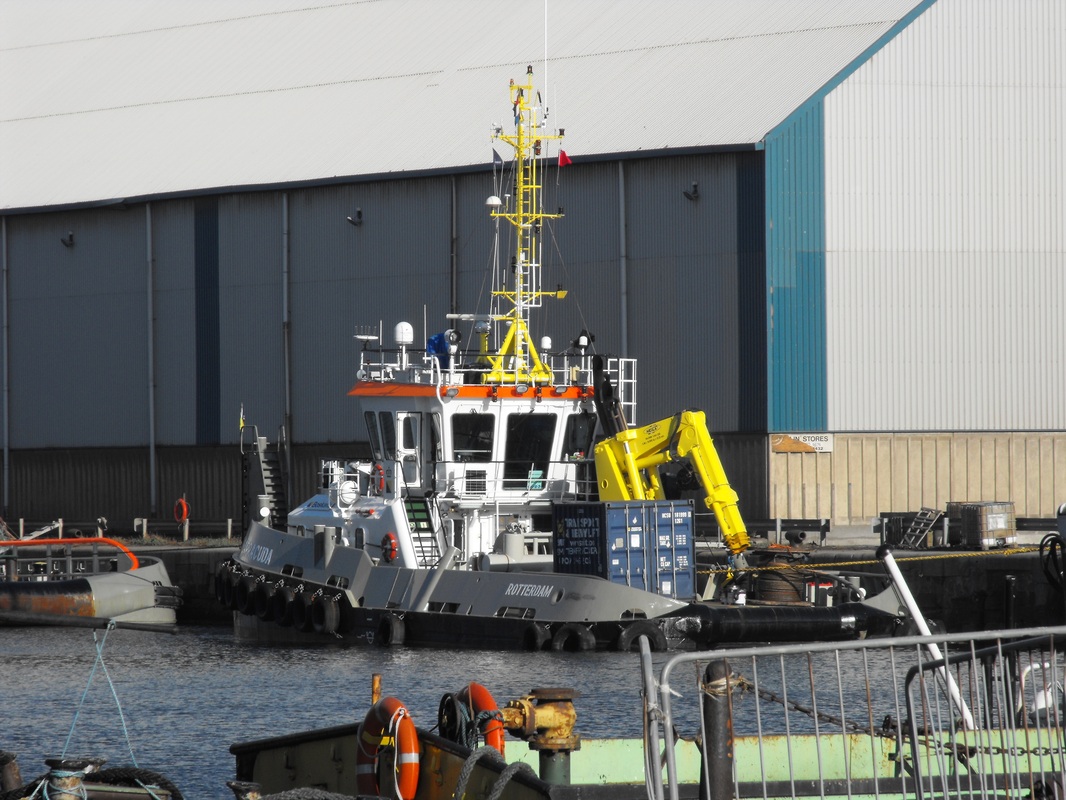 In 2004 Smit International undertook an extensive tug new building program ordering 18 new tugs for various Smit divisions. An order was placed with the IHC Holland Delta Shipyard for three of these vessel of which Smit Barracuda is one. She was built to the yards Delta 2500 design, her sister ships were christened Bison and Bronco.

She has a shallow draft hull and is powered by a pair of Caterpillar 3508BTA main engines with a power output of 2000bhp (1492kW) driving a nozzled Wärtsilä Lips-FP-2000mm diameter propeller. Hydraulically driven Veth Jet
bowthruster with an output of 150kW are also provided. The vessel can achieve a speed of 10kts and a bollard pull of 27.5t.

On starboard side of the towing winch is the DD-Marine crane which has a SWL of 21t at 5.1m reach and 9.25t at 12.19m reach. On starboard side behind the cargo rail the emergency exits for the engine room and the rudder gear room are located.

Below the main deck is located the accommodation for a maximum of six persons. The laundry and the showers are
located on the starboard side and on port side is a store,  on the same level further aft is the main engine room. The main superstructure houses a large mess room and the galley with access to these rooms being via the locker room.

Despite having two main engines the Delta tugs have only one exhaust funnel at the starboard end of the deck house.

On each side of the bridge deck are a life raft and life bouy, on the portside a ladder goes aft to the work deck.

The wheelhouse has two parallel consoles to operate the vessel and its associated equipment, at the rear of the wheelhouse is a small galley.

On the top deck is located the radar equipment which is manufactured by Alphatron. At the front of the top deck the ships horn and a searchlight are fitted, a second searchlight is also located here but is directed aft. 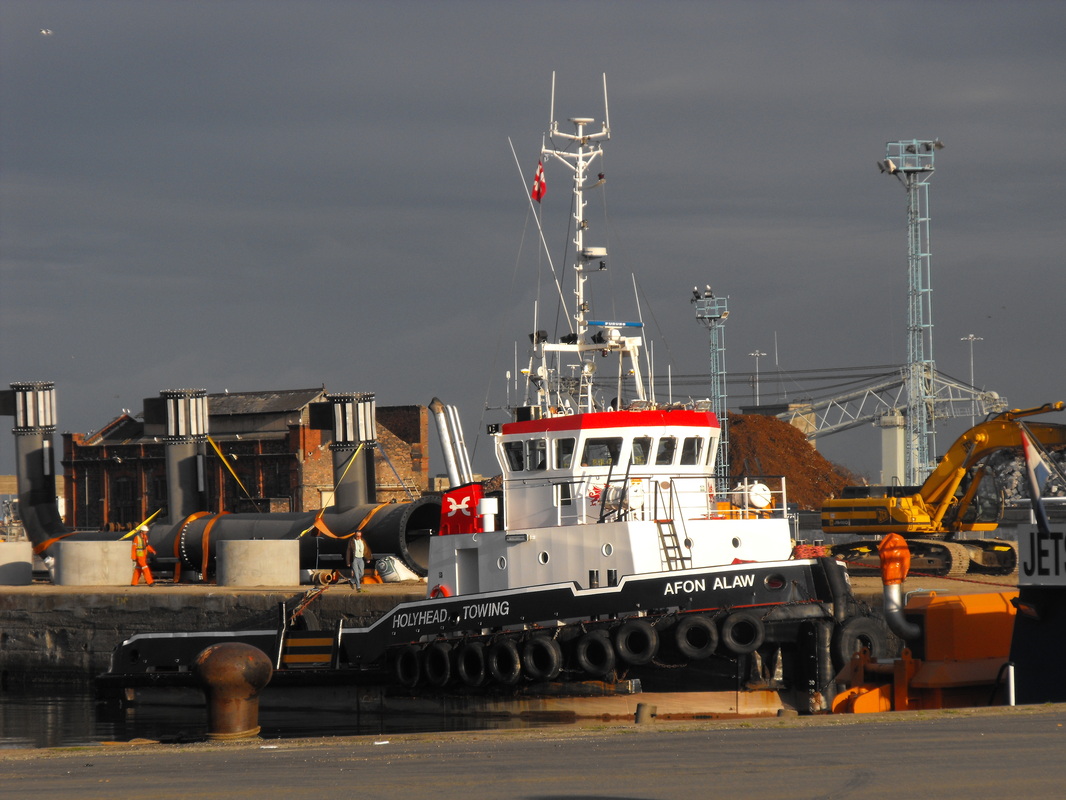 Holyhead Towing Tug Afon Alaw seen catching the early morning sun in Liverpool Docks on 29 August 2013. She was built in the UK in 2004 by the Hepworth Shipyard at Paull on the River Humber.

She has a length of 25.5m, 9.5m beam with a 2.4m minimum working draft and is powered by two Cumins KTA38-M2 engines (total 2600bhp) each driving fixed pitch propellers in fixed Kort nozzles through ZF gearboxes fitted with box
coolers.

Heated and air conditioned accommodation is provided on board for 12 personnel.

She is owned and operated by Holyhead Towing which was founded in the early 1960's as a subsidiary to the Holyhead Boatyard. Holyhead Towing started with one small coastal tug and has since developed into an operator of larger coastal and deep sea tugs. Since the late 1980's the company has focused on shallow draught multipurpose tugs and workboats in support of the dredging and marine civil engineering industries.

As well as using proven vessel designs, Holyhead Towing has successfully developed and built its own vessels. As a result, the company now works on large and varied projects in a wide range of locations.

The company is also involved in a number of joint ventures with other companies working throughout the Mediterranean, Caspian Sea ad Falkland Islands.

Svitzer Bidston photographed on a choppy River Mersey on 20 March 2014, she was one of three tugs assisting the Crude Oil Tanker Hilda Knutsen to the Tranmere Oil Terminal.

She is a common site on the river although she recently spent some time working in Belfast.

Bollard pull ahead is 55t. 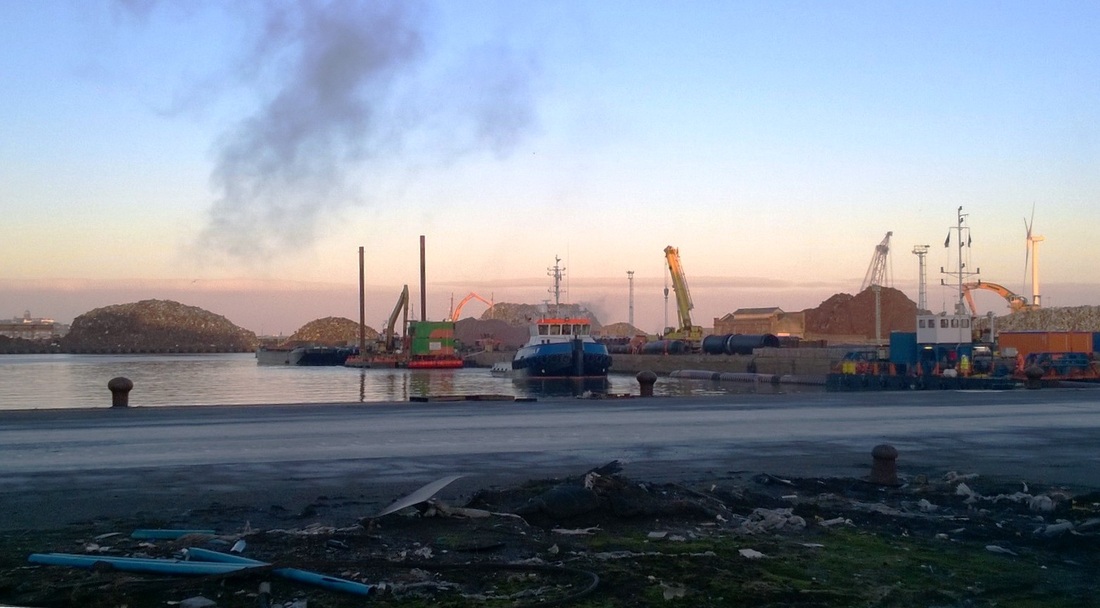 The picture was taken shortly after sunrise with my phone, the smoke drifting over the docks is from a diesel generator that had just been started up to the left of where I was standing.

Built in The Netherlands by the Neptune Shipyards as Yard Number 436 she is 27.53m long with a 10m beam and 3m draft.

Powered by a Caterpillar diesel engine (2386kW) she has a service speed of 12knots. 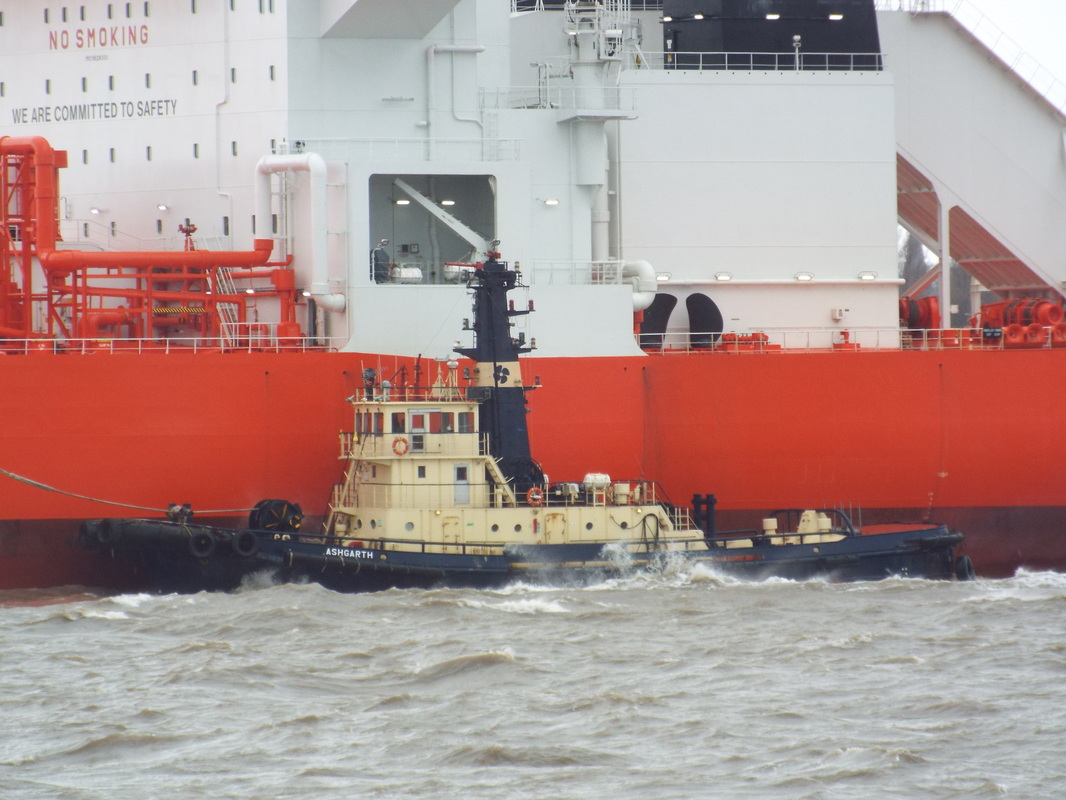 Powered by twin Daihatsu diesel engines (1,800hp each) she has a maximum speed of 14 knots, bollard pull ahead is 55t and astern 49t.

The vessel is equipped with a variety of fire fighting equipment including a dry powder monitor and three foam / water monitors.

Owned by Svitzer Marine she was up to 1998 called Senho Maru. 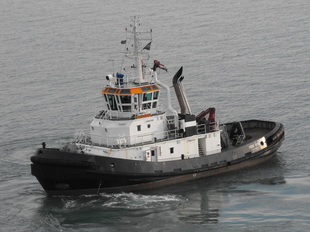