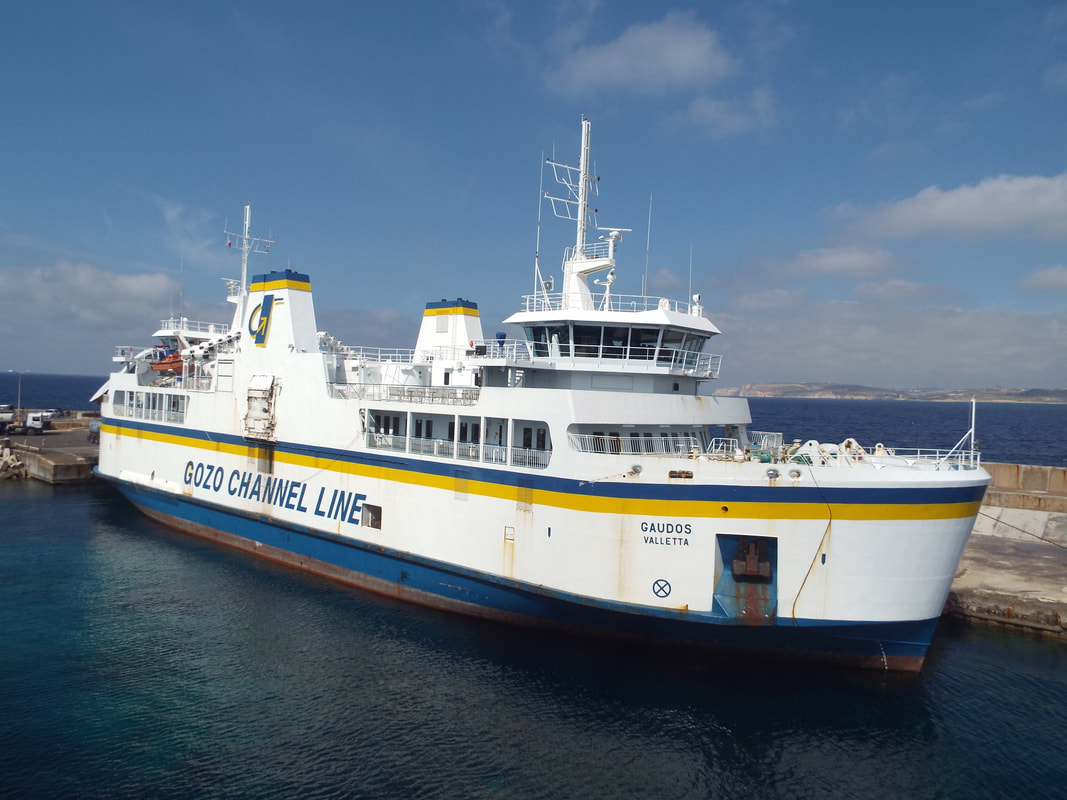 Wightlink's ferry Wight Ryder I photographed alongside in Portsmouth on the 7 April 2015.

I took the photograph from her sister ship Wight Ryder II as we came into Portsmouth for the day after taking the short 22 minute sailing across the Solent from Ryde on the Isle of Wight.

She was the first of Wightlink's new purpose built high speed passenger catmarans to operate the Ryde to Portsmouth route replacing FastCat Ryde and FastCat Shanklin.

Built in the Philipines by FBMA-Babcock as Yard Number 1026 she is 41m long with a 12 m beam and 1.6m draught, equipped with twin Caterpillar ACERT C32 engines she has a top speed of 26.7 knots. 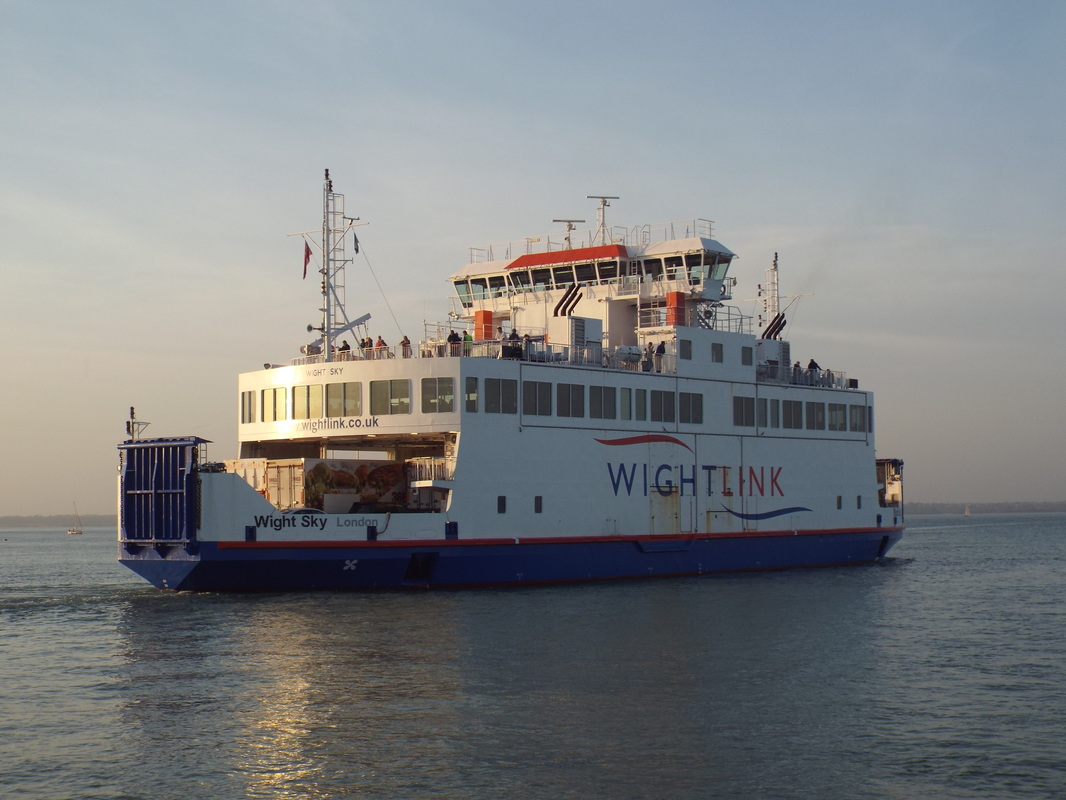 She is one of three vessels operating the Lymington - Yarmouth route which replaced older ferries as part of a £57m investment.

Designed by Naval Architect Hart Fenton she was constructed in Croatia at the Brodogradiliste Kraljevica shipyard whilst the interior ship design was undertaken by LAP Architects. Laid down on 13 August 2007 she was launched on 12 April 2008 and after sea trials entered service on 25 February 2009.

Designated an R-Class vessel she is 62.4m long with a 16.1m beam and 2.3m laden draft with a maximum displacement of 1494t and DWT of 330t. She has a total of 110m of vehicle lanes and can accommodate 65 cars or 28 freight vehicles over eight lanes and two car decks. In total there is capacity for 360 passengers.

Wightlink and its predecessors have been operating ferry services for over 160 years and now carry over 5,500,000 passengers, 1,200,000 cars and over 200,000 coaches and freight each year on its three routes across the Solent to the Isle of Wight. 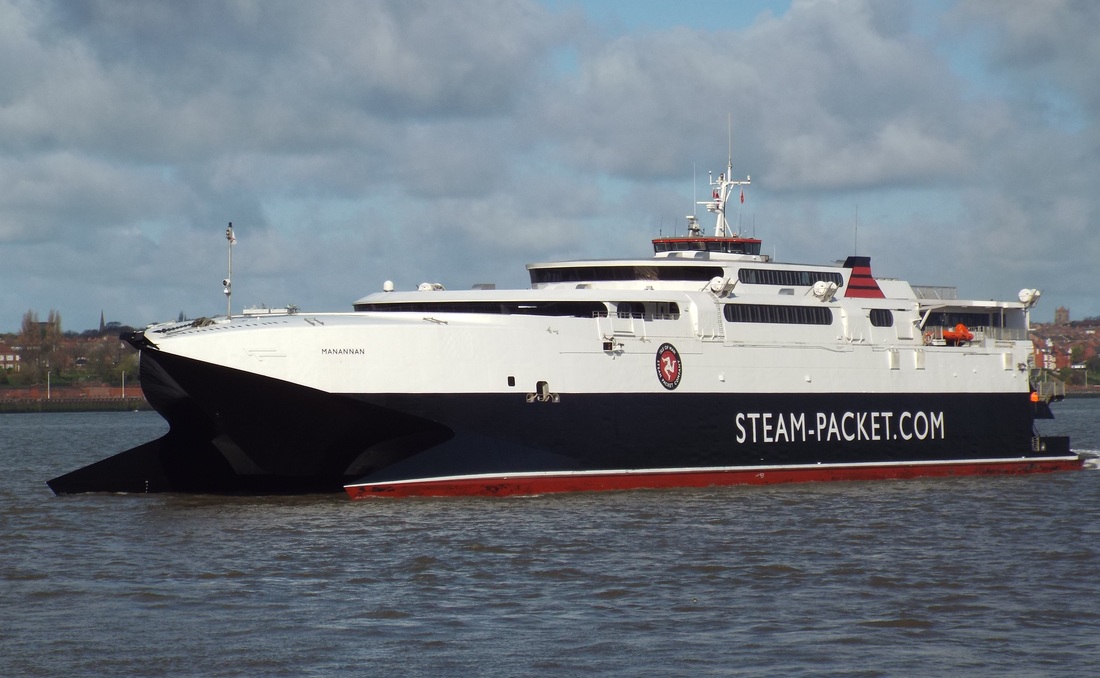 96m Wave Piercing Catamaran (WPC 96)  Manannan photographed in Liverpool late afternoon on 11 April 2014, she was approaching the Steam Packet Companies terminal following an Irish Sea crossing from Douglas on the Isle of Man.

Powered by 4  x resiliently mounted Caterpillar 3618 marine diesel engines (28,800 KW Total Power @ 1050 RPM) and Water Jets ( 4 x 150D Wartsila LIPS - steering and reversing) she has a top speed of 37.5 knots with a full load although this can increase to 50 Knots when
running light.

In 1998 as Devil Cat she worked for a short time for the
TT LIne and then for a couple of years crossing the Cook Straits for a local ferry company.

In 2001 she was commissioned into the US Navy on a five year charter as the USS Joint Venture (HSV-X1). Reconfigered with the addition of a  helicopter flight deck and internal modifications she was able to carry 400t of cargo and 325 combat personnel up to 3000nm. In 2003 she operated with the US Navy as part of Operation Enduring Freedom in a variety of roles.  She was bought by the Isle of Man Steam Packet Company in May 2008 and was fitted out in Portsmouth for her new role following a 11,868mile journey from Hobart which she did in 27 days. Arriving in Douglas on 11 May 2009 her maiden voyage for the Company was on 22 May 2009.

She can carry 850 passengers and crew in addition to
200 vehicles and makes the crossing across the Irish Sea in 94 minutes.  Accommodation on board includes a variety of seating areas  including two cinema lounges, a large bar area at the stern and a cafe. There are also a number of lounges on the upper deck for reserved, premium and executive club passengers.

Manannan is named after the Celtic God of the Irish Sea.

The Isle of Man Steam Packet Company began  operations in 1830, they currently carry approximately 600,000 passengers and 170,000 vehicles per year  (cars and motorcycles) between Liverpool and the
Isle of Man. 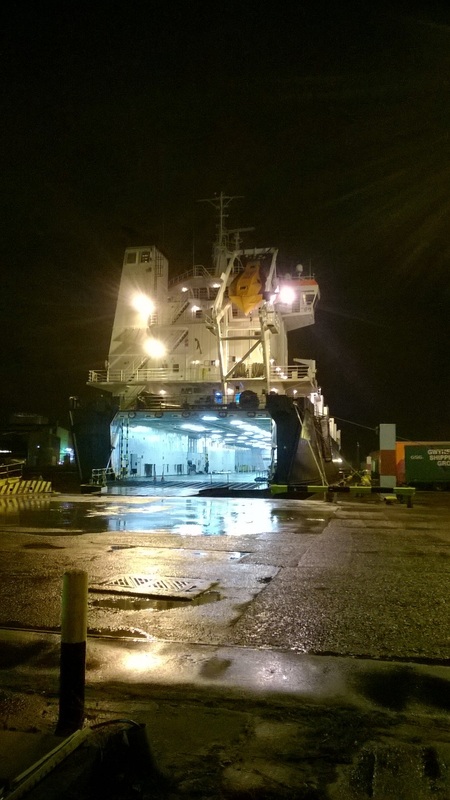 She is a sister ship to Clipper Ranger, Helliar and Hildasay and has had various names in her career including Varbola, RR Arrow and Dart 6.

Built in Spain by Huelva Astilleros as Yard Number 572 she is 122.32m long with a 19.8m beam and 6.2m draught. In total she has a 1057m of lane capacity which enables her to carry approximately 67 trailers with accommodation for 12 passengers, powered by two Wartsila 9R32 Diesel Engines (9,900hp) she can make 16 Knots.

Originally built as Varbolat for the Estonian Shipping Company, Tallinn she was chartered to the Dart Line in 1998 for use on the Dartford - Vlissingen route where she was re-named Dart 6 in January 1999.  In September 1999 the charter ended and she reverted back to being Varbola. Subsequent to this she has worked for Merchant Ferries for use on the Heysham - Dublin route, Norse Merchant Ferries on the Liverpool - Belfast and Heysham - Dublin routes, Condor Ferries where she  sailed between Portsmouth, Jersey and Guernsey, The Norfolk Line, The Isle of Man Steam Packet Company  and Seatruck Ferries.

She is owned and Managed by Seatruck Ferries. 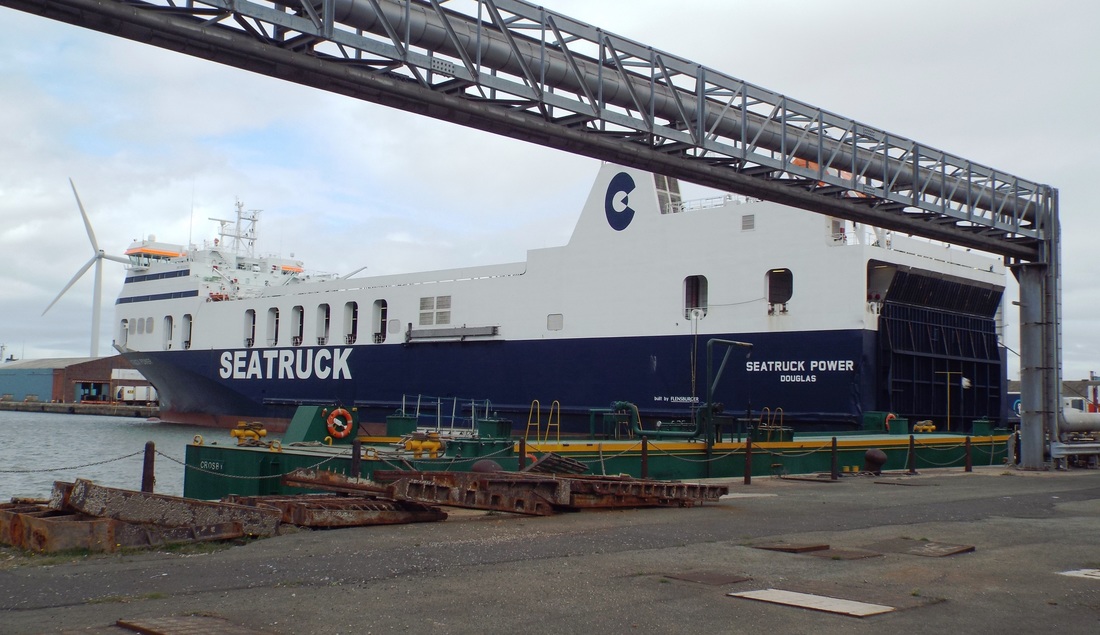 She is a Seatruck FSG 746 series Ro-Ro ferry and was built in Germany at the FSG Flensburg Yard as Yard number 747 in 2011.

Accommodation on board comprises 2 senior officer cabins, 5 officer single cabins and 14 crew single cabins in addition to 6 double driver cabins and a spare cabin giving a complement of 22 crew and a maximum of 12 drivers. 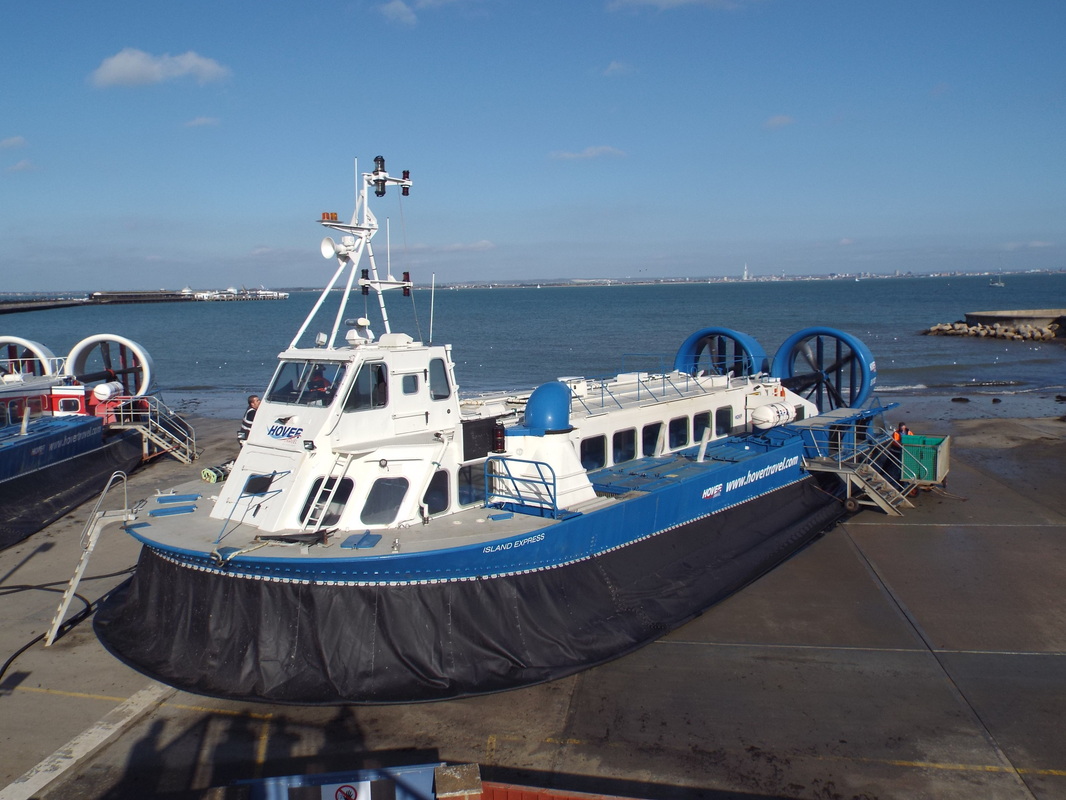 Since I started visiting the Isle of Wight in 2008 I have seen her and been on her a number of times, the trip across the Solent generally taking less than 10 minutes.

She was built by the British Hovercraft Corporation in 1984 as Yard Number 5, her keel was laid in May 1983 and she was delivered to Dampskibsselskabet Oresund in Denmark on the 27 June 1984 where she was named Freja Viking. Up to April 1994 she worked the Copenhagen to Malmo Route before being laid up. Sold to Scandinavia Airlines Systems in January 1997 she was sold again to Hovertravel in September 1997. In 2002 she was renamed Island Express and currently works the Ryde to Southsea route.

She can carry 100 passengers + Crew 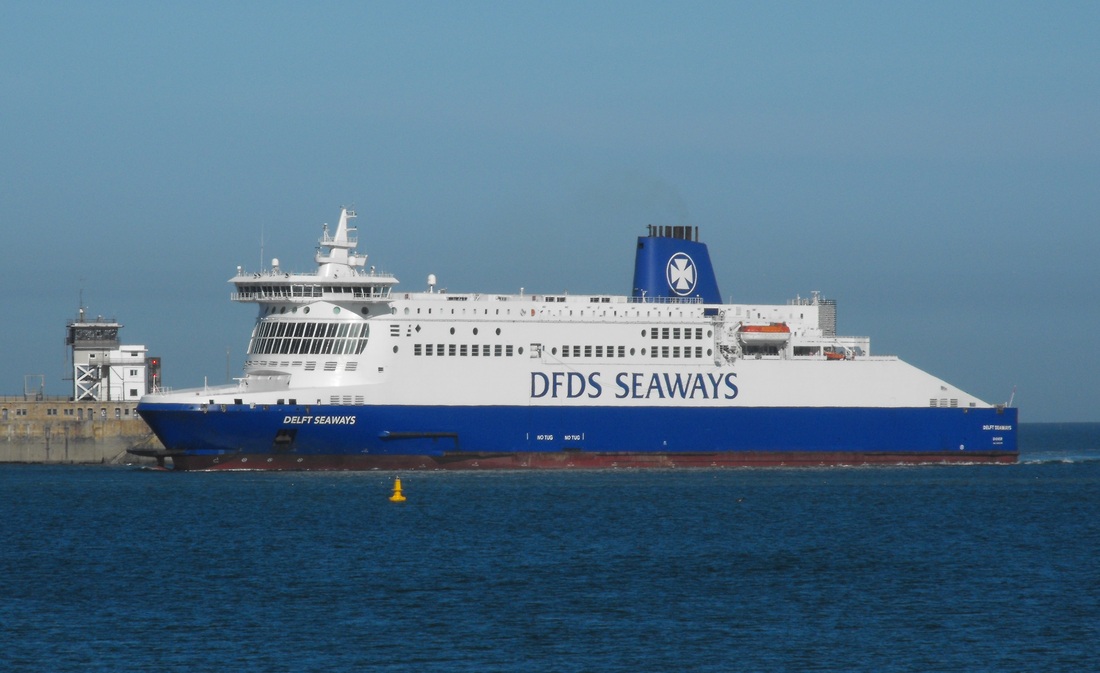