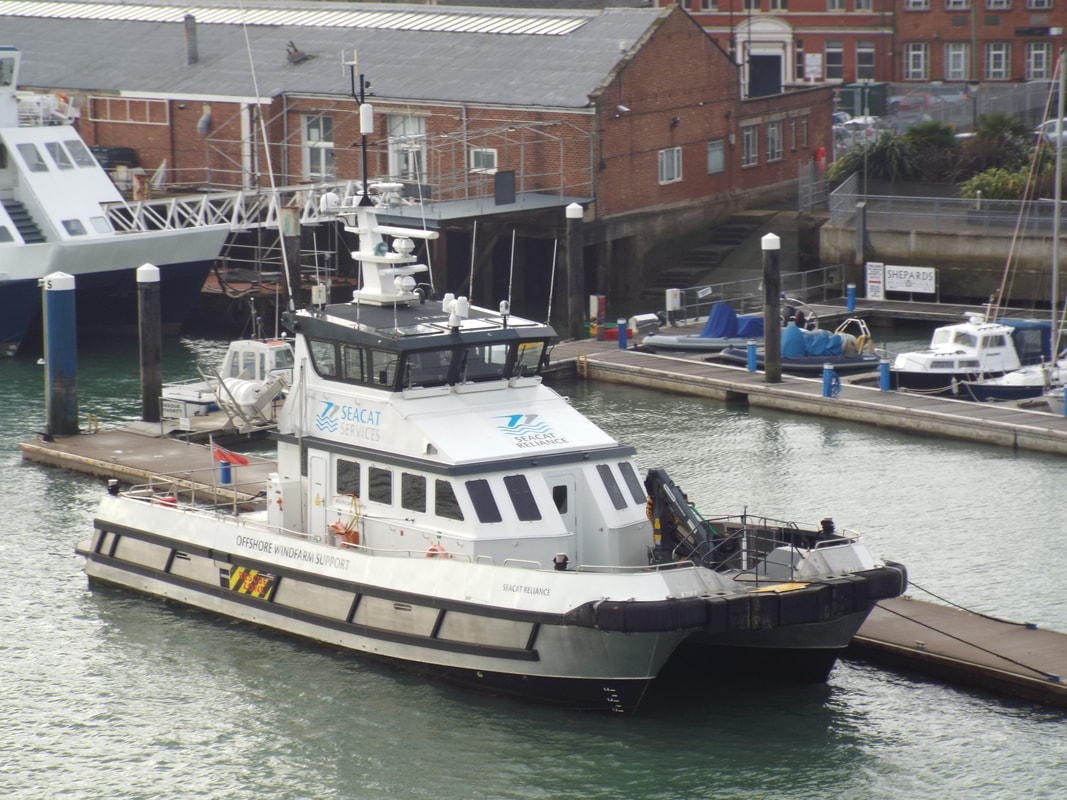 ​Seacat Reliance photographed on 31 October 2015 from the deck of our Red Funnel Ferry on our way home from the Isle of Wight.

She is a 21m DNV-GL class Windfarm support/crew transfer vessel designed to maximise passenger safety and comfort and is a multi-purpose workboat specifically for the offshore windfarm application. She can carry 12 passengers and up to 3 crew and was built in 2012 by South Boats only a short distance from where I took the photograph.

Seacat reliance is operated by Seacat Services who are based in Cowes on the Isle of Wight and who operate a fleet of multi-purpose offshore energy support vessels. All their vessels are designed and constructed to conduct fast, smooth and comfortable transport of persons and goods from the shore to the wind farm and vice versa in the toughest of Northern Europe’s marine environments. Every vessel in the fleet is able to operate up to 150Nm offshore. The company has successfully completed contracts in UK, German and Danish waters. 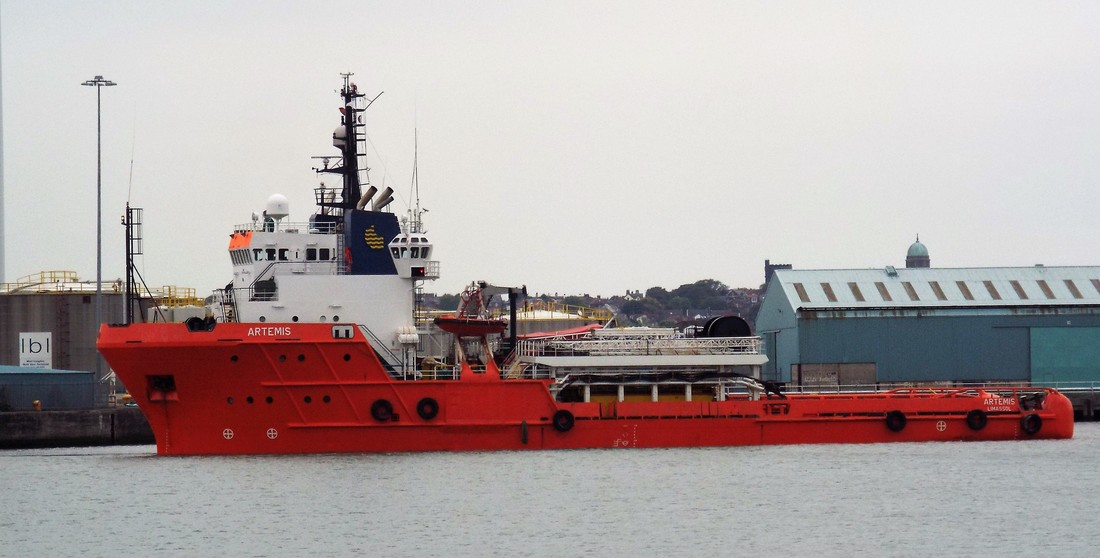 The vessel is managed by the Holyhead Towing Company.

South Boats IOW are based at Medina Yard in Cowes which is almost on the opposite side of the river from where I saw Penrhos Bay. They undertake shipbuilding and repair together with the design and construction of offshore crew transfer catamarans and other vessels.

Crew boat photographed in East Cowes on 4 April 2015 as we came into East Cowes.

FBM Marine was founded in Cowes in the 1940'a as Fairey Marine but was taken into receivership in 1975 with the rest of the Fairey Group. After numerous takeovers and mergers the company was acquired by Babcock International in 2000.

In the background  can be seen the old Saunders-Roe hanger which is now known as Venture Quays. From here the company built many sea planes and hovercraft.  Since the Queen's Silver Jubilee in 1977 the hanger doors have been adorned with the world's largest Union Flag. 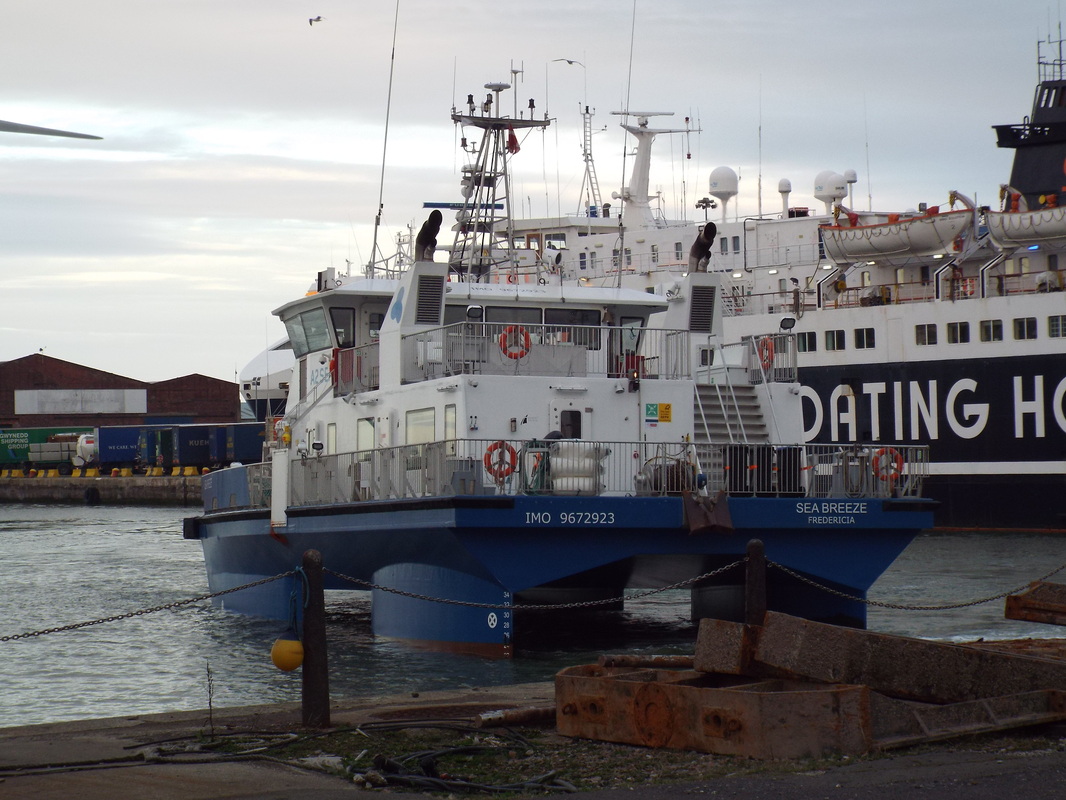 Danish registered crew boat Sea Breeze photographed in Liverpool docks on 9 April 2014, she had just collected personnel from the 'floating hotel' and was turning to head out of the docks to work on the new wind farm off the North Wales coast.

She was built by Danish Yachts in Skagen, Denmark as Yard Number 119 and is 25.76m long with a 10.60m beam and 1.8m draught, prior to being named Sea Breeze she was called Fob Swath 2. 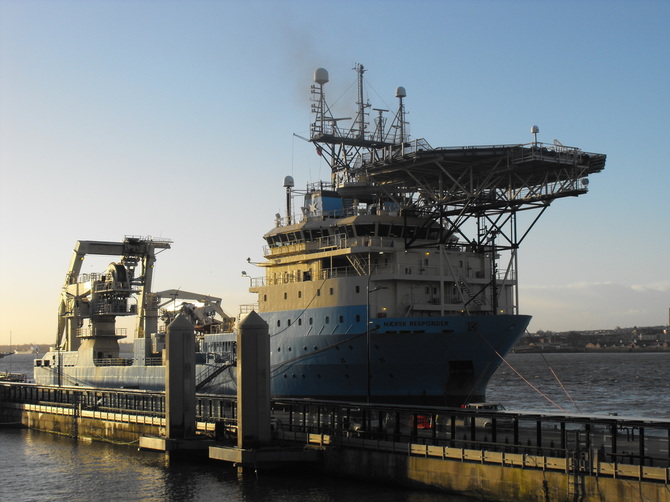 Maersk Responder photographed catching the early morning sunlight on 10 December 2013. She was berthed in the River Mersey close to the Cruise Ship Terminal, she has since relocated into the main dock complex.

She is an R Type Cable Laying Field & Subsea Support Vessel operated by Maersk Supply Services. They operate more than 60 vessels manned by approximately 200 crew and supported by over 200 onshore staff Worldwide.

She can accommodate 68 personnel including crew.

She can accommodate 68 persons total including crew. 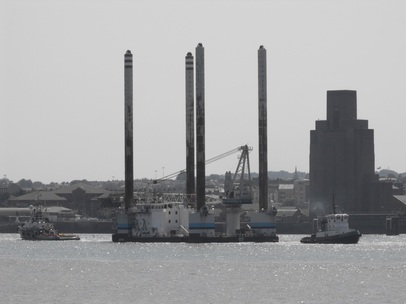 Seen on 10 July 2013 is the Jack up Rig JB-114 which was being towed towards Cammell Lairds facility on the River Mersey. This vessel is currently employed working on the new wind farms off the North Wales coast.

She is operated by the Van Es Group who supply, maintain and operate marine and construction equipment worldwide through a group of companies. JB-114 is run by one of these companies, Jack-Up Barge bv which is based in Sliedrecht, The Netherlands. This part of the Van Es Group can supply two types of self elevating platforms, the Modular Jack-Up and the Monohull Jack-Up.


The Modular Jack-Up is a self elevating platform with pay loads ranging from 250 to 400 tons. They are built of units equal in size to ISO freight containers. This enables them to be transported easily and cheaply around the world. The modular Jack-Ups can be transported by rail, road, or ship to any location both offshore or inland. The barge can easily be mounted together on the site.

The monohulls are larger platforms than the Modulars, with payloads starting at 1,000 tons up to 2,500 tons. These are built and equipped to ensure any specific marine or offshore project can be executed. They also have a
heli-deck and crane capacity ranging from 300 to 1,000 tons.

She is able to operate in a maximum water depth of approximatly 40m with a wave height of 2m and wind speed of 20m/s. Survival Conditions! are noted as being (based on a 40m water depth) 15m waves/12.5 seconds and wind speed of 39m/s. Standard accommodation is up to 64 personnel in 32 twin rooms. 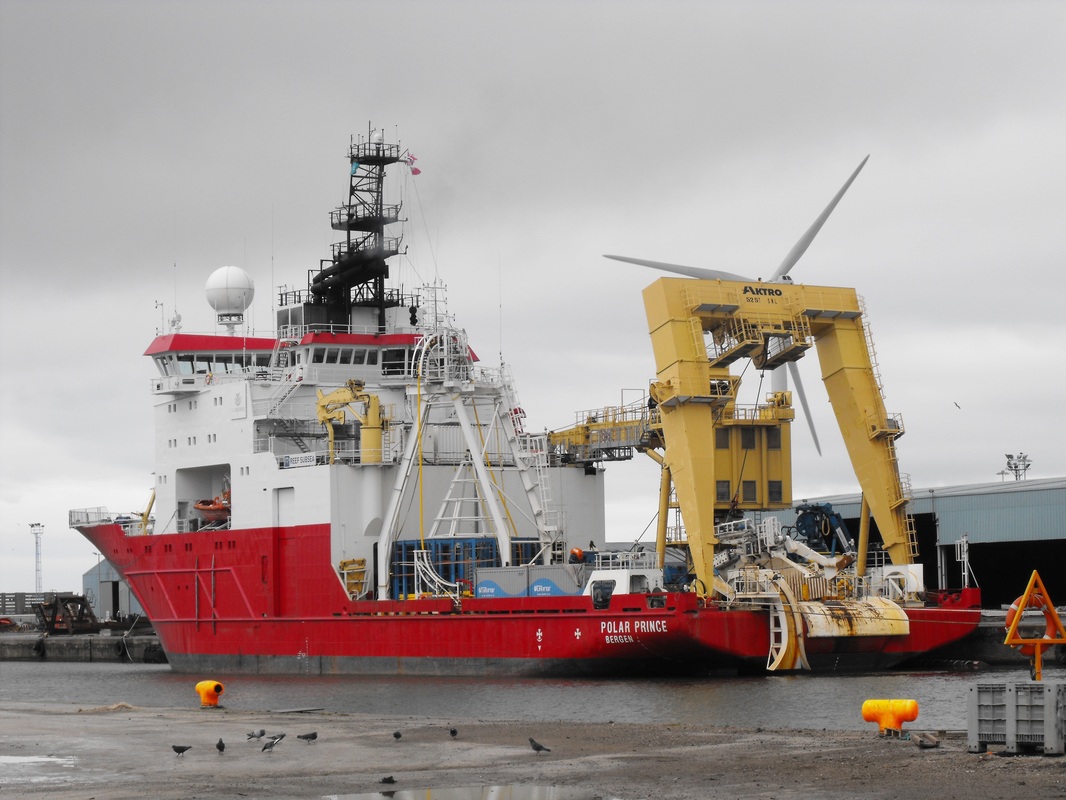 Seen in Liverpool on 13 June 2013 Polar Prince is a multi-functional Construction Support Vessel that is able to perform operations in severe sea and weather conditions. She can provide a wide range of services including light construction activities and cable laying as well as inspections, maintenance and repair operations.

Like many similar vessels she is working on the wind turbine facility off the North Wales coast and has been a regular visitor to Liverpool Docks this year.

Her helicopter pad is designed for a Sikorsky S-92, Super Puma EC225/ AS332 or equivalent.

Accommodation is available for 31 persons in single cabins and other facilities include a galley, mess room,
lounges, instrument rooms, fitness suite, sauna, solarium and a  laundry. 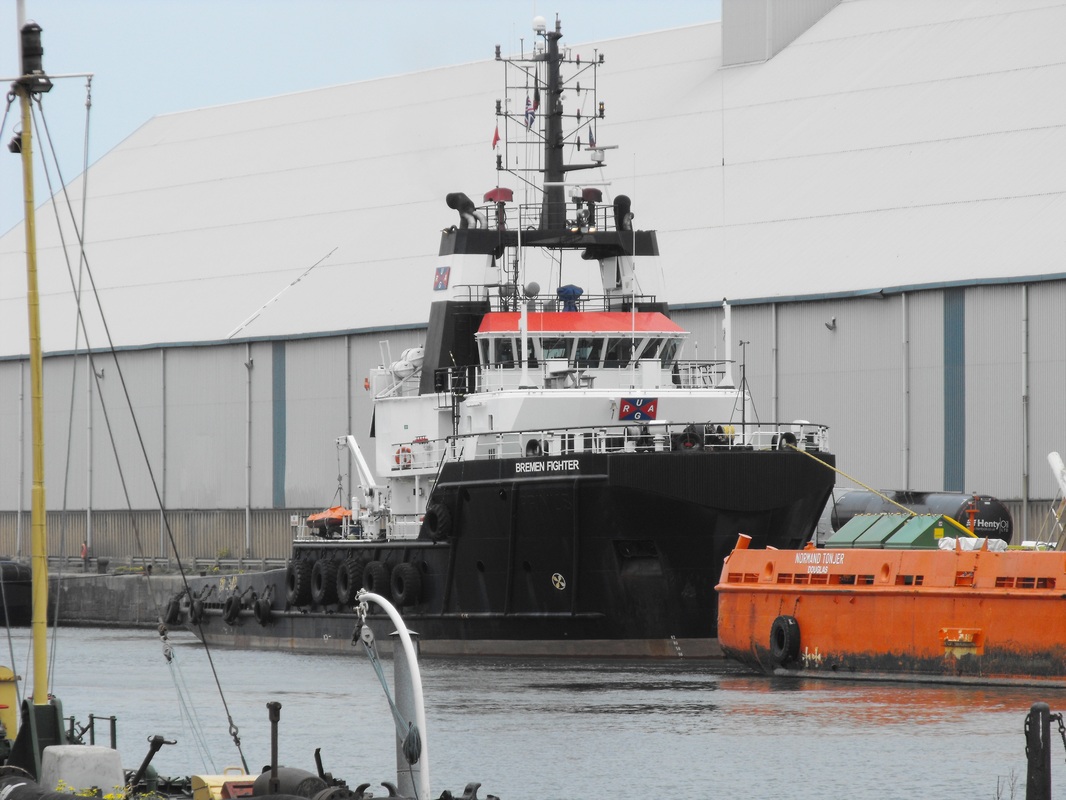 The photograph above is of the Tug Bremen Fighter and was taken in Liverpool Docks on the 24 May 2013, this vessel is actively working on the new wind farm off the North Wales coast and is a regular visitor to Liverpool.

In 2011 she was sold to nterweser Reederei AG – Bremen, Germany and renamed Bremen Fighter. 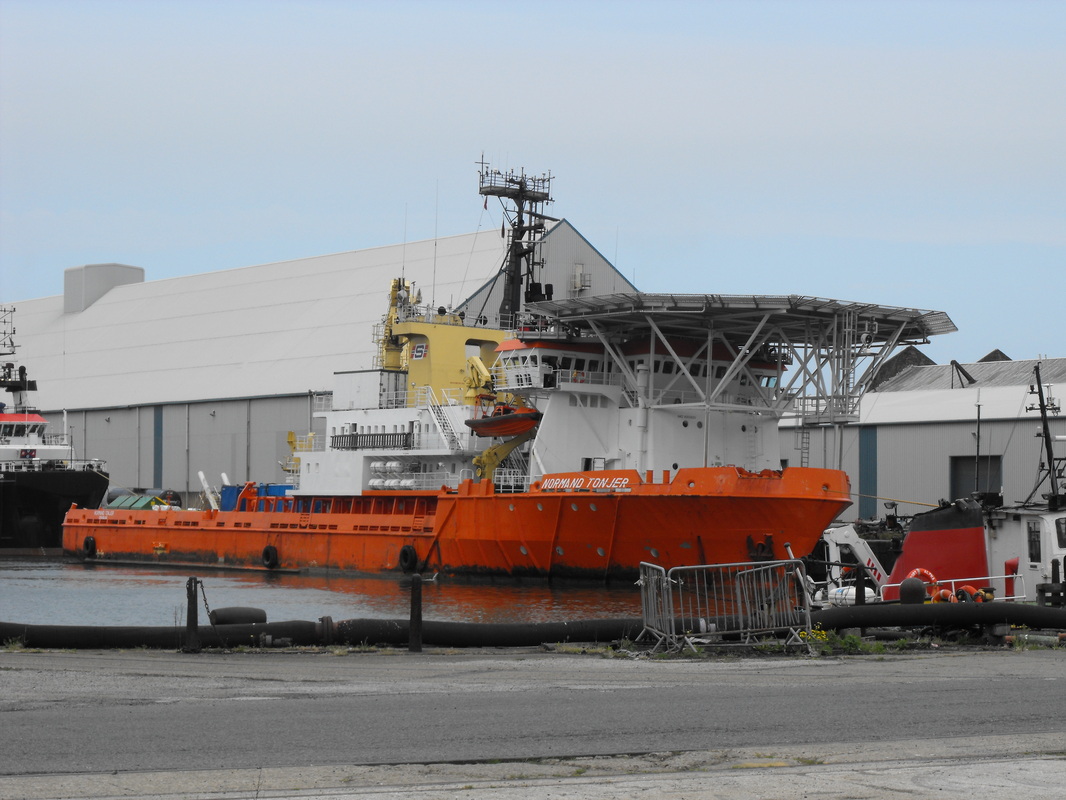 With all the work being undertaken on the wind farms off the North Wales coast there have been quite a few off-shore vessels visiting Liverpool over the last few months. Normand Tonjer is one such vessel that I have been lucky enough to photograph a number of times between May and June 2013.

Powered by four 800 hp thrusters she also has 550m2 of usable deck space and accommodation for 57 personnel in 39 cabins.

The helideck above the bridge is designed to accommodate a Super Puma L2 helicopter, she also has three deck cranes, a single offshore crane and  separate ROV hanger on the port side. 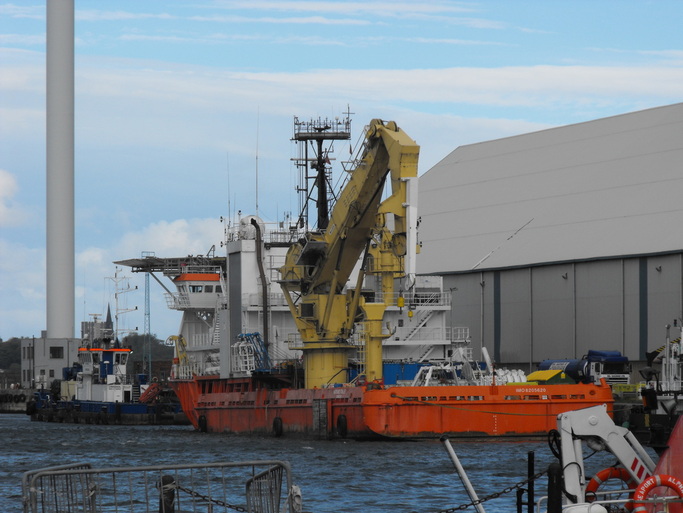 She is owned by Solstad Offshore which was founded in 1964 (as Solstad Rederi AS) by Captain Johannes Solstad in Skudeneshavn. In the first ten years of its life the Company bought and operated eleven dry-cargo vessels and took delivery of three new builds (semi-container type).

The Company's offshore related activities began in 1973 when four supply vessels were ordered from a Dutch ship yard. During the next two years the Company took delivery of six further supply vessels and three anchor-handling/tug/supply vessels.

From 1974 to 1982 the Company owned and operated a combined fleet of offshore and dry cargo vessels and in this period built five anchor handling vessels in Newfoundland and three semi-container vessels in Rostock, East
Germany.

The last dry cargo vessel was sold in 1982 and for the next eight years Solstad Offshore ASA owned and operated just offshore/supply vessels. For a period of five years ending in 1987 the Company expanded significantly as nine new build offshore service vessels were taken delivery of and a further two second hand offshore service vessels were also added to the fleet.

From 1989 to 1998 the Company operated a fleet of  five handy-size bulk carriers but since 1998 has been owning and operating offshore service vessels solely.

In 1996 a new period of expansion and renewal of the fleet started based on a strategy to operate a modern fleet well adapted to current and future demands.  Simultaneously with the expansion of the fleet, the company has also grown
to become a global operator. The Company now has branch offices in Aberdeen, Rio de Janeiro and in Singapore, and the vessels are operating world-wide. 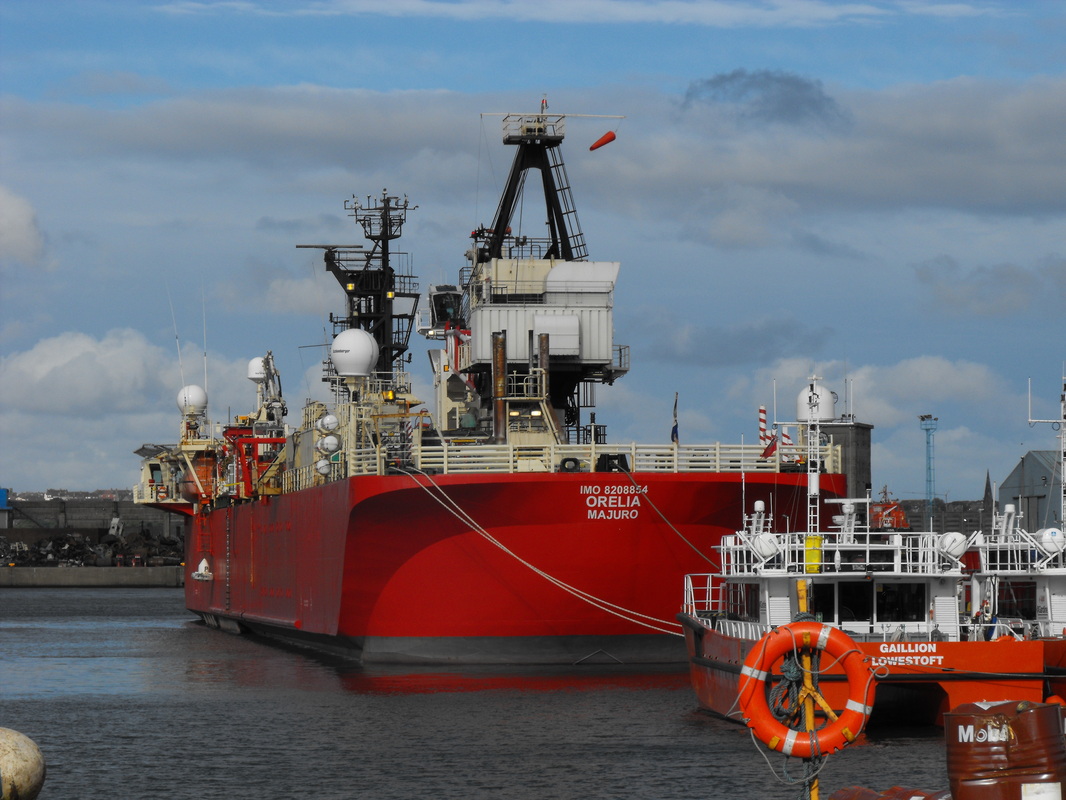 Early morning picture taken in Liverpool 24 May 2013 of the dive vessel Orelia.

She is designed for the simultaneous operation of two three man bells at depths of up to 450m through two seperate moon pools and has an extensive deck area of 1800m2 making her suitable for a wide range of sub-sea operations.

She is equipped with two main pedestal cranes located forward and aft with an additional telescopic articulated crane.  Propulsion consists of  6 Azimuth thrusters rated at 906kW each.She also has a helideck and accommodation for 99 people in 62 cabins as well as saturation chambers for the diving teams. 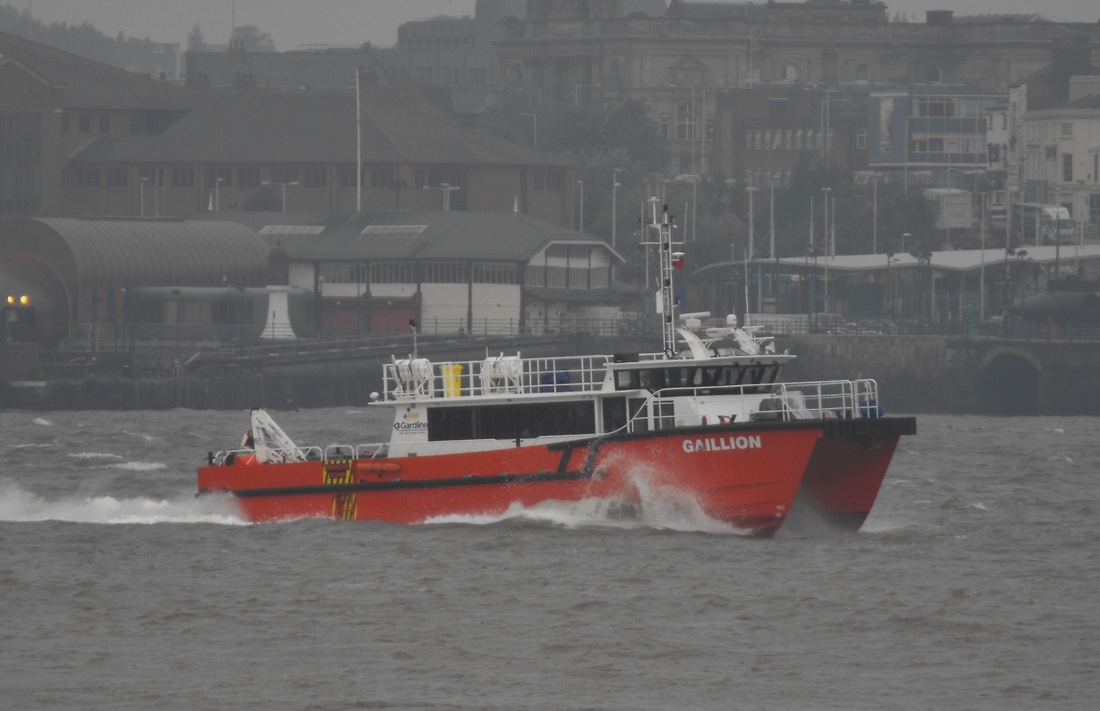 MCA cat 2 Personnel transfer vessel Gaillion picking up speed as she heads out of the River Mersey on her way to the new wind farm being constructed off the North Wales coast.

She can accommodate 12 passengers and 3 crew.

She is operated by Guardline who are an international and multi-disciplinary marine service company based in Great Yarmouth, they have other offices in the UK and across 5 continents with principal international offices in the USA, the Netherlands, Singapore, Australia and Brazil. Gardline Marine Sciences is a member of the Guardline Group which was established in 1969 to provide marine support to the offshore oil and gas industry in the North Sea.