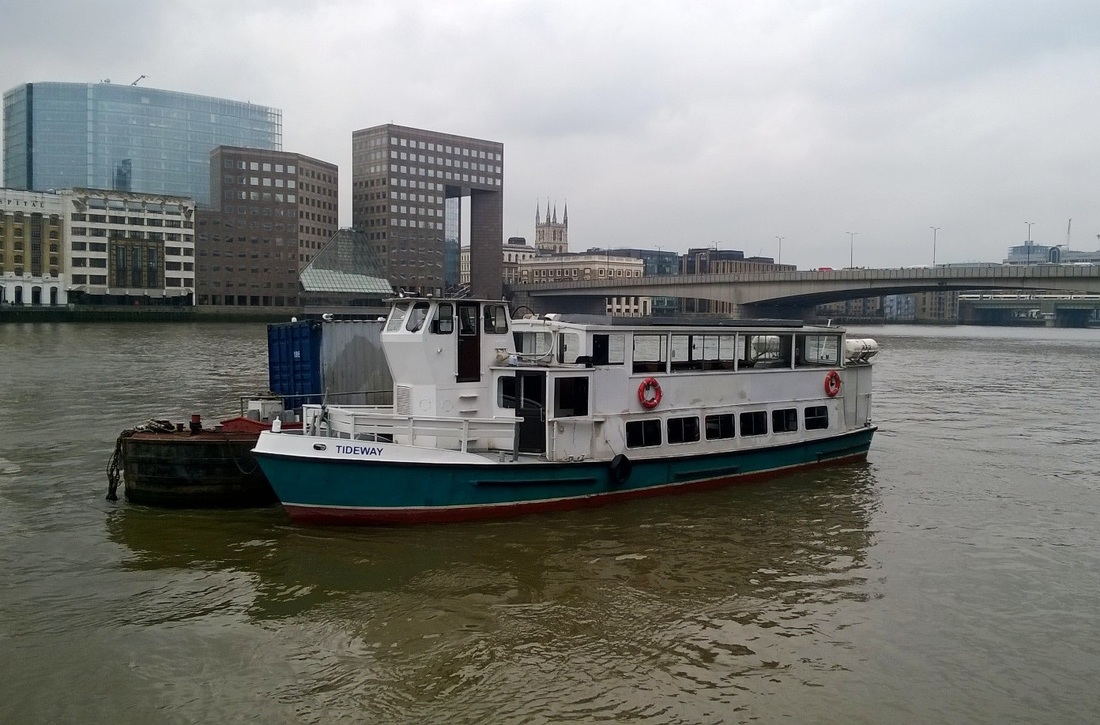 I spent two days in London last week on a training course and walked to the river during my lunch break on both days. 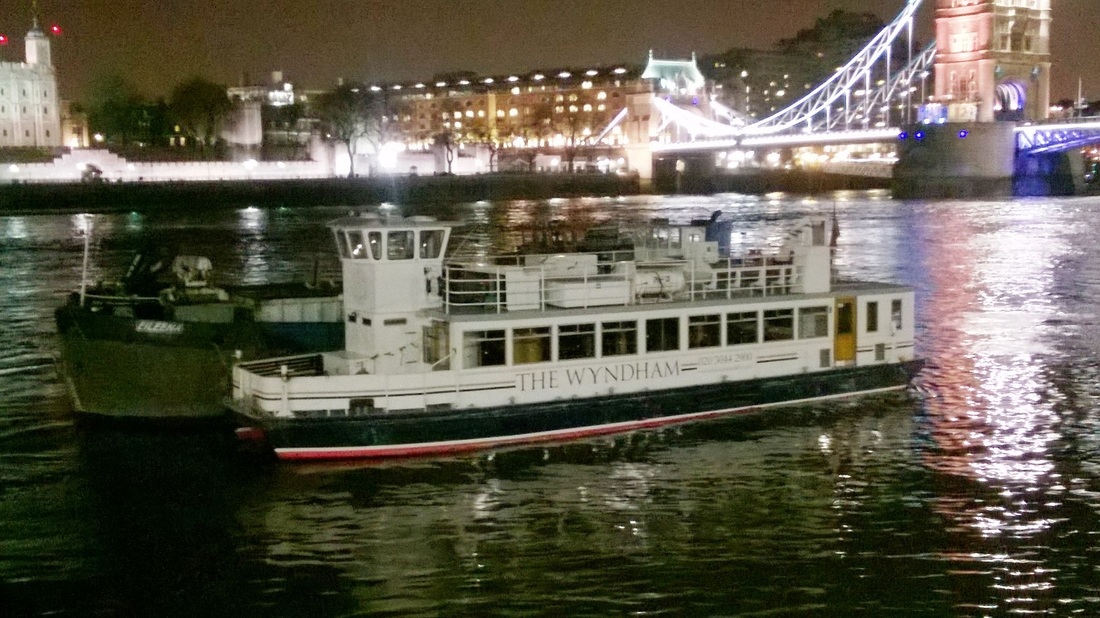 She was built in 1981 and was previously operated by Falmouth Leisure Cruises as Twinstar III operating day cruises to Trelissick Gardens & Smugglers Cottage.

The vessel was laid up in 2008 and subsequently bought in 2009 by Thanes Executive Charters who renamed her after a complete refurbishment Wyndham Grand. Refurbished again in 2015 she has now been named Wyndham and operates as a party boat on the river. Licensed to carry 120 people she is 19m long with a 5m beam and has no fixed seating offering a flexible layout.
She has a fully services galley and can provide seated lunch and dinner for up to 60 people. 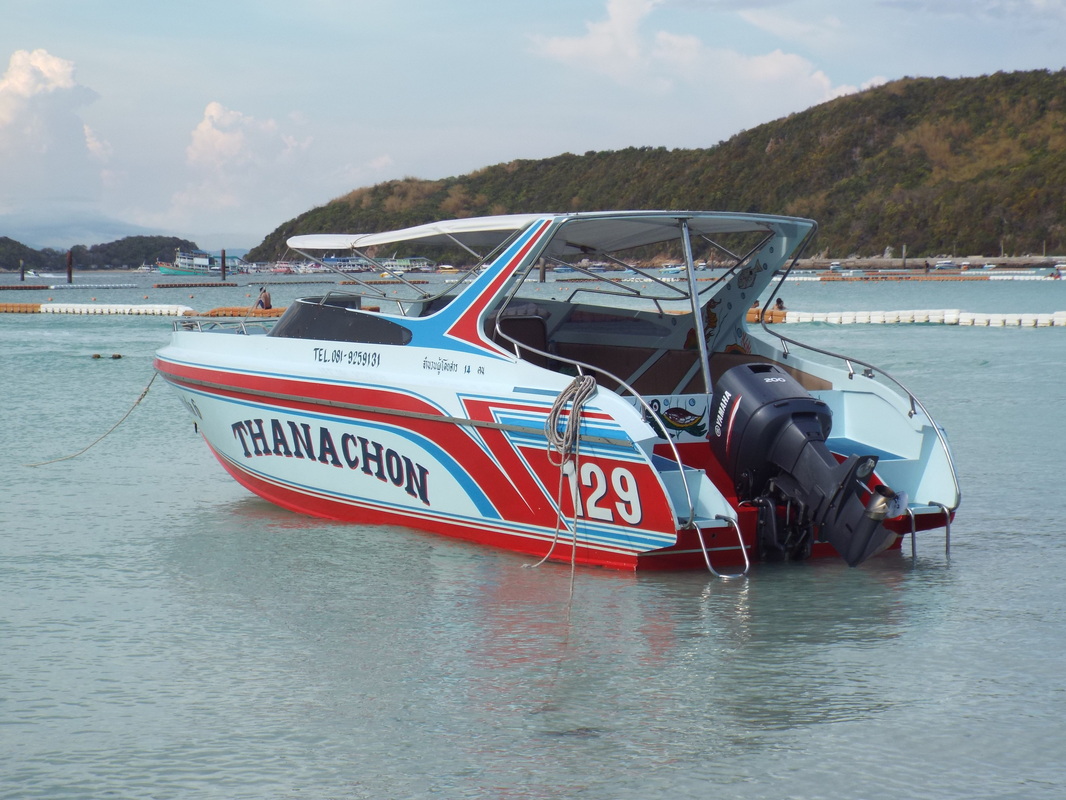 The front of the boat was open and this is where we sat.

The boat was fast and on quite a number of occasions we became airborne as we hit waves and the wakes of the local ferries as we headed back to Pattaya where we moored just off the beach and waded to shore in knee deep water. 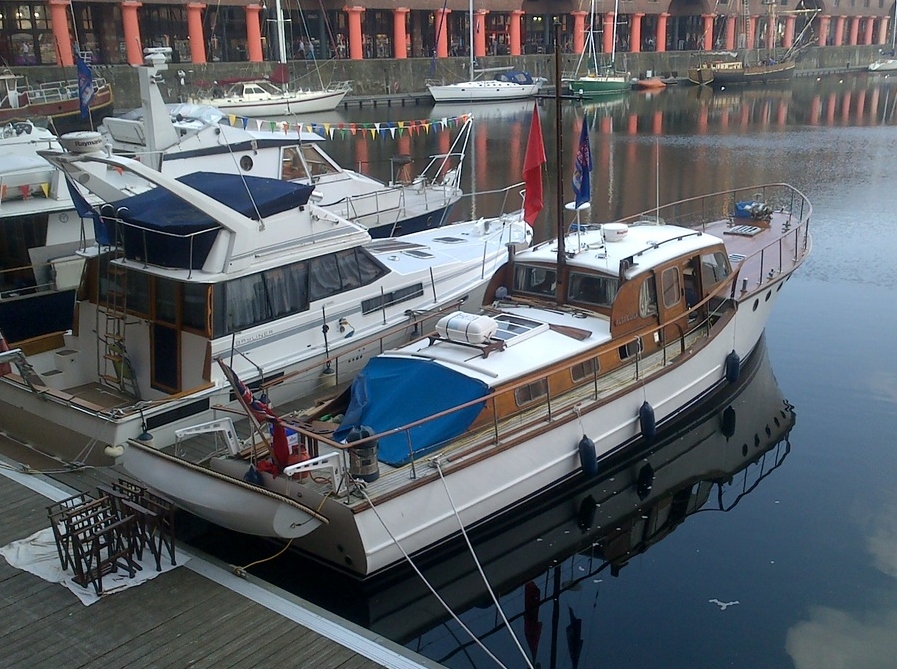 Albaquila photographed in the Albert Dock, Liverpool on 16 September 2014. I spotted her whilst I was doing a lap of the Albert Dock basin during my lunch break and took her picture from my phone.

She is a twin screw motor yacht built in 1947 by Osbourne William of Littlehampton.

Over the last few years I believe she has undergone extensive renovation. 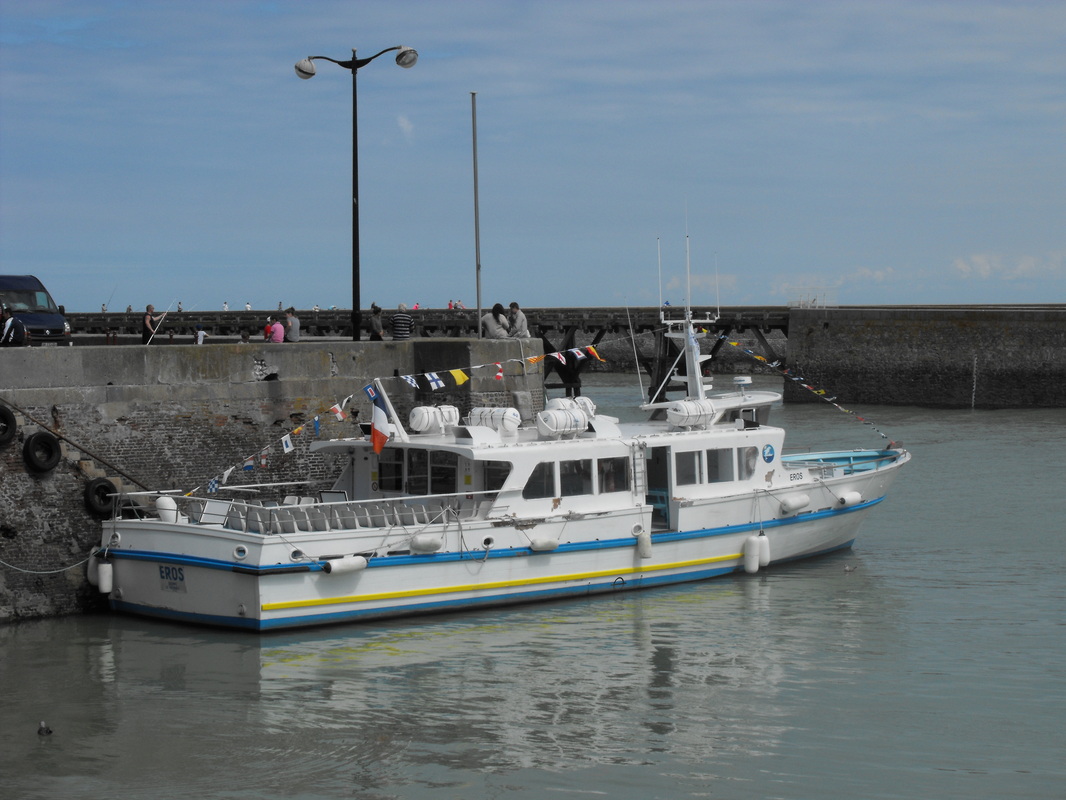 She can accommodate 116 passengers and undertakes trips along the coast where visitors can admire the sand and shingle beaches and cliffs of Treport and
Mers-Les-Bains.

She is the largest of three vessels operating trips out
of the harbour. 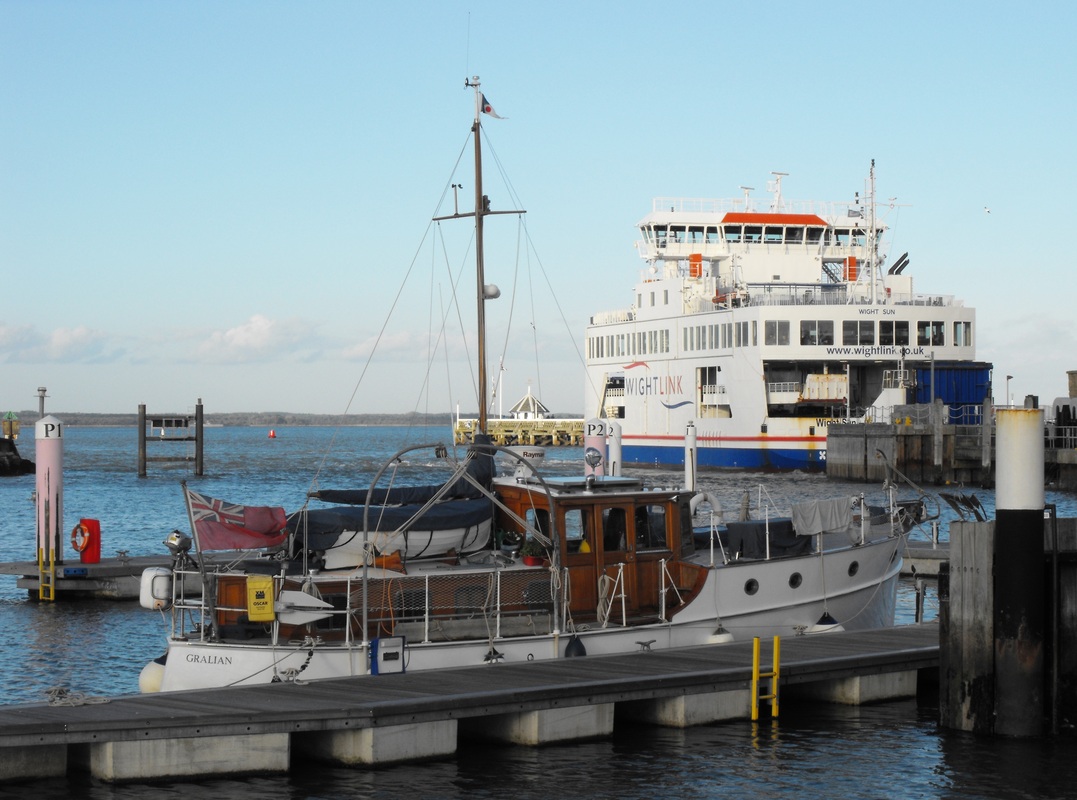 Photographed in Yarmouth on the Isle Of Wight on 29 October 2013 Gralian is a Motor Cruiser built in 1937.

Gralian was the fifth of eight Medina Class 45' motor yachts built by Saunders-Roe in Cowes on the Isle of Wight between 1935 and 1939. Originally named Jeakelard she is of carvel construction with teak planks on oak frames. She was originally a gift from Joyce Sherren to her husband Wing Commander PC Sherren, a First World War flying ace who was killed in the King's Cup Race in 1937.

During World War 2 she was requisitioned as a patrol vessel, serving on the East Coast and taking part in the D-Day landings in 1944.  Her ship's bell is inscribed 'War Service Admiralty 1940-1946'. She was renamed Gralian after the war and has cruised extensively in British and European waters. In 1969 her two Chrysler petrol engines were replaced by Mercedes Benz OM314s.

Gralian is on the UK Historic Ships Register.

Seen in Liverpool on 4 September 2013 Sarinda was built as Harbour Defence Launch (HDML) ML 1392 by
Berthon Boats, Lymington. She was ordered on 11 September 1942 and completed on 20 December 1943.

The HDML was designed by W J Holt at the Admiralty in early 1939 and ML 1392 is one of 486 HDMLs constructed mainly by yacht builders in the UK as well as other Allied countries.

Originally her complement would have been 10 personel and she would have typically been armed with a QF-2 pdr main gun, 20mm Oerlikon AA Cannon and 0.303 vickers machine guns located either side of the bridge. She would have also carried 6 to 8 depth charges on her aft deck. As the QF-2-pounder guns were not particularly accurate, possibly because of the boats tendency to roll many were replaced by another 20 mm Oerlikon gun.

Engines on this type of vessel varied but her diesel engine and single propeller would make between 11 and 12.5 knots.

As part of the 149th ML Flotilla she was a navigation leader at Gold Beach during the D-day landings in June 1944. On 6 March 1945, she captured a Biber type German midget submarine off Breskens in the Scheldt estuary. After the war, she continued in service as the fast despatch boat FDB 73.

In October 1947, she was transferred to HM Customs & Excise and renamed  Valiant. In the 1960's she was sold and became the motor yacht Frol-Pejo and by the mid 1970's she had been renamed Sarinda.

A total rebuild as a motor yacht was  started in 1979 and completed by a new owner after she was sold in 1987. 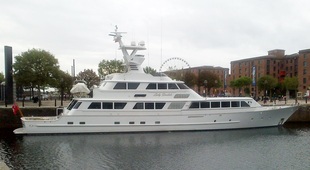 In front of the Albert Dock on 13 September 2013 a super yacht called Lady Sandals was moored which I believe was at one time owned by the actor Nicholas Cage but now belongs to Gordon Butch Stewart owner of Sandals/Beaches Resorts.

Built in 1985 by Feadship as Yard Number 631 she was designed by De Voogt Naval Architects and had a refit in 2007.

Accommodation is provided for 8 guests in 4 cabins (1 Master, 1 Double, 2 Twins). She has a crew of 7. The hull is constructed from steel with an aluminium superstructure and teak decking. 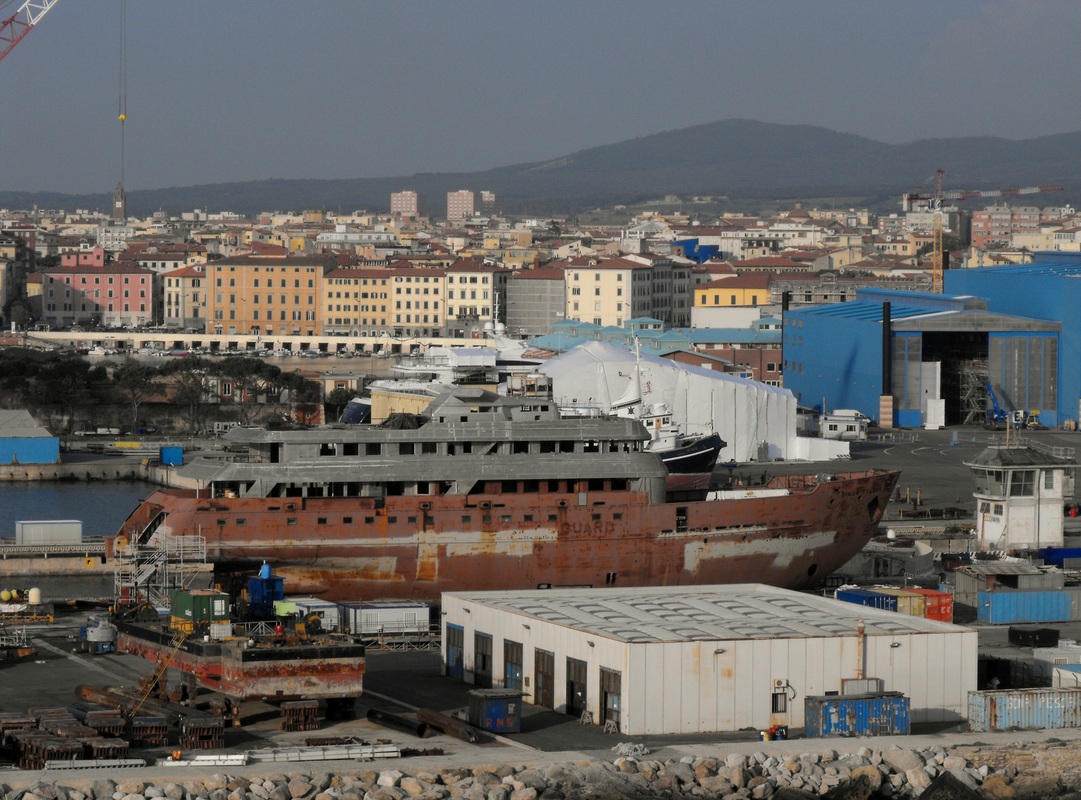 The Fraser is powered by two Diesel Electric 2-cylinder Alco diesel engines via two propellers giving a speed of 13.8 knots and range of 5000nm at this speed or 5800nm at 10 knots, her original complement was 24.

She was sold by the Canadian Authorities via Crown Assets Disposal for $251,000 and when photographed was in the process of being turned into a luxury yacht by Exploration Commercial Charter Yachts of Livorno. The Fraser underwent general maintenance and was confirmed as being seaworthy at the Woodside dock in Dartmouth, N.S. before leaving for Livorno via Bermuda.

The ice-class vessels multimillion-dollar refurbishment will see extensive changes to her superstructure and interiors.The vessel will be used for charters and being an ice-class ship could be used for expeditions to the Arctic or Antarctic. 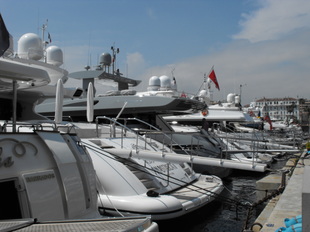