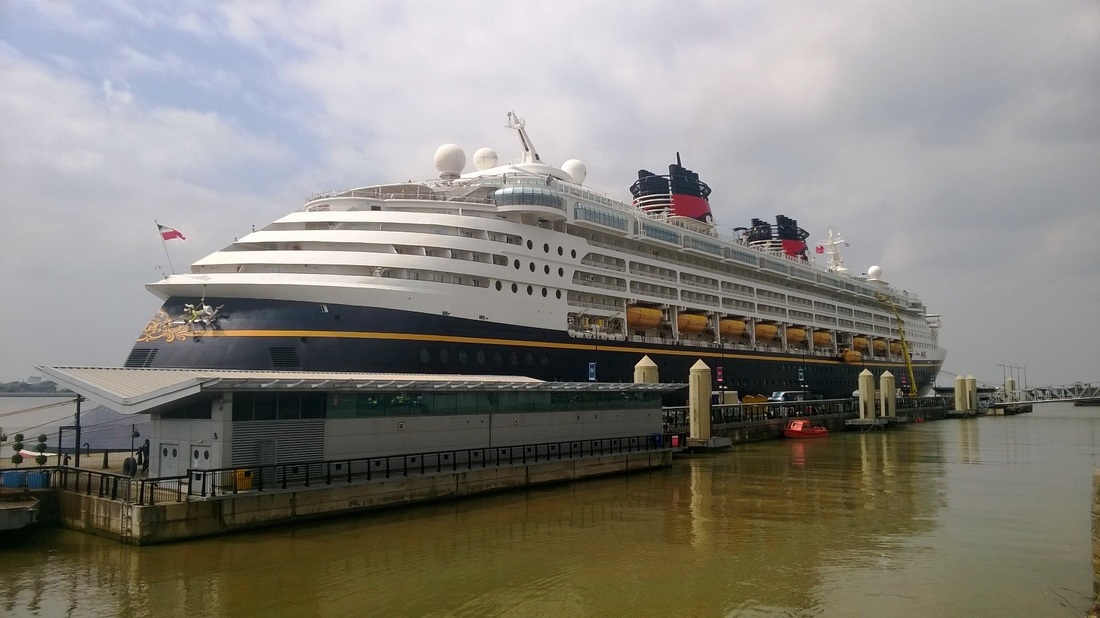 Disney Magic photographed in Liverpool on 28 May 2016.

Propulsion consists of 5 Sulzer 16ZAV40S Diesel Electric engines with twin propellers giving a cruising of 21.5 knots and a maximum speed of 23.5 knots. 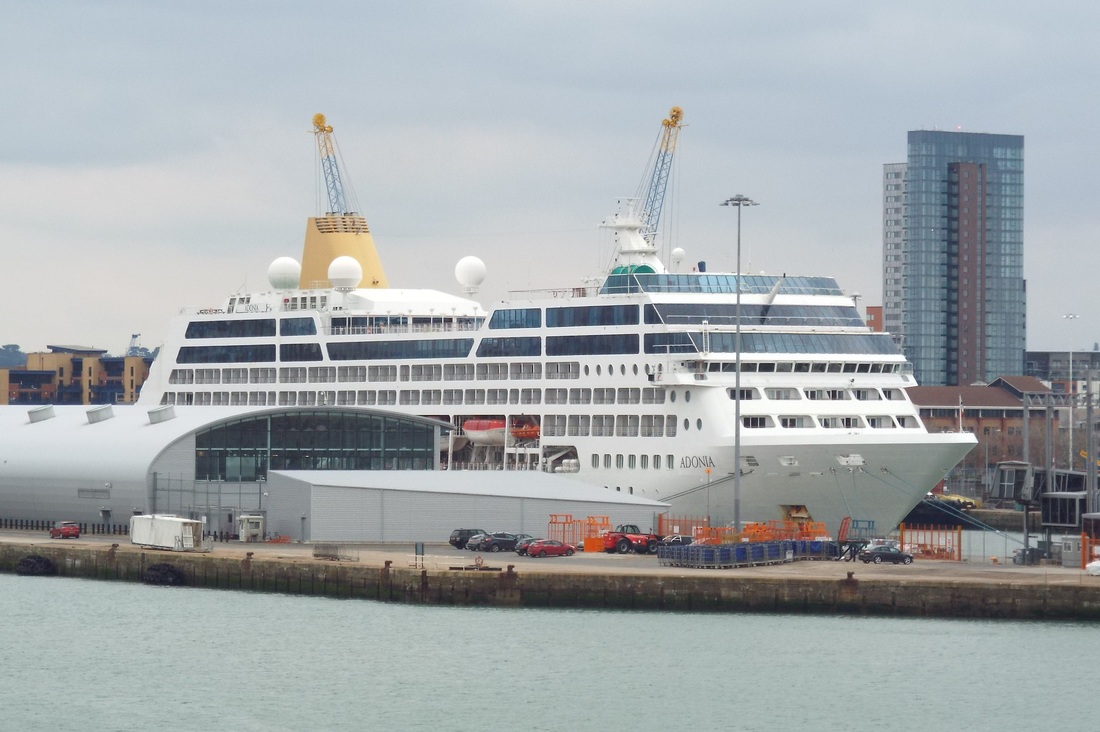 Adonia photographed in Southampton on 4 April 2015.

She was originally built as the last of eight R Class ships for Renaissance Cruises and entered service in 2001 as R Eight.

After Renaissance ceased operations and filed for bankruptcy in late 2001, the vessel was seized by creditors and laid up in Marseille, France.

In 2003 she reentered service this time as the sole cruise ship in Swan Helenics fleets and was named Minerva II. She sailed as Minerva II until April 2007 when she was transferred by the parent company (Carnival Corporation) to Princess Cruises where she was renamed Royal Princess.

She was transferred to the P&O Fleet and renamed Adonia in May 2011.

Her keel was laid on 12 May 2006 and 80 prefabricated sections each weighing approximately 325 tons were then installed, The completed superstructure was floated out on 15 January 2007 and she commenced sea trials on 24 August 2007 before being formally named in Southampton on 7 December 2007 just before her maiden voyage on 11 December 2007.

Independence of the SEAS﻿ 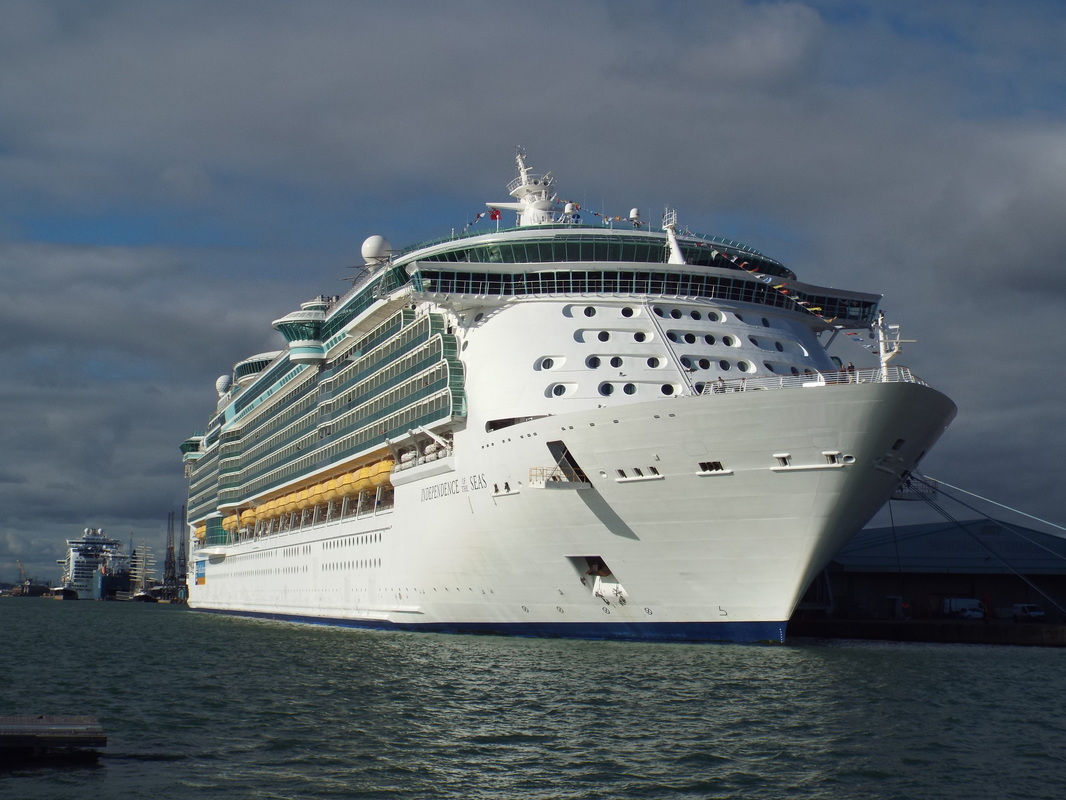 Independence of the Seas photographed in Southampton on 25 October 2014.

She is a Freedom Class cruise ship operated by Royal Caribbean and entered service in April 2008.

In 2013 she had a $7m refurbishment which added a new restaurant and cafe and new features including an outdoor cinema screen.

Propulsion consists of six diesel engines which can supply 75,000kW of power to two ABB Azipods and one Fixipod (14MW each) giving a maximum speed of 23 Knots and a cruising speed of 21.6 Knots. 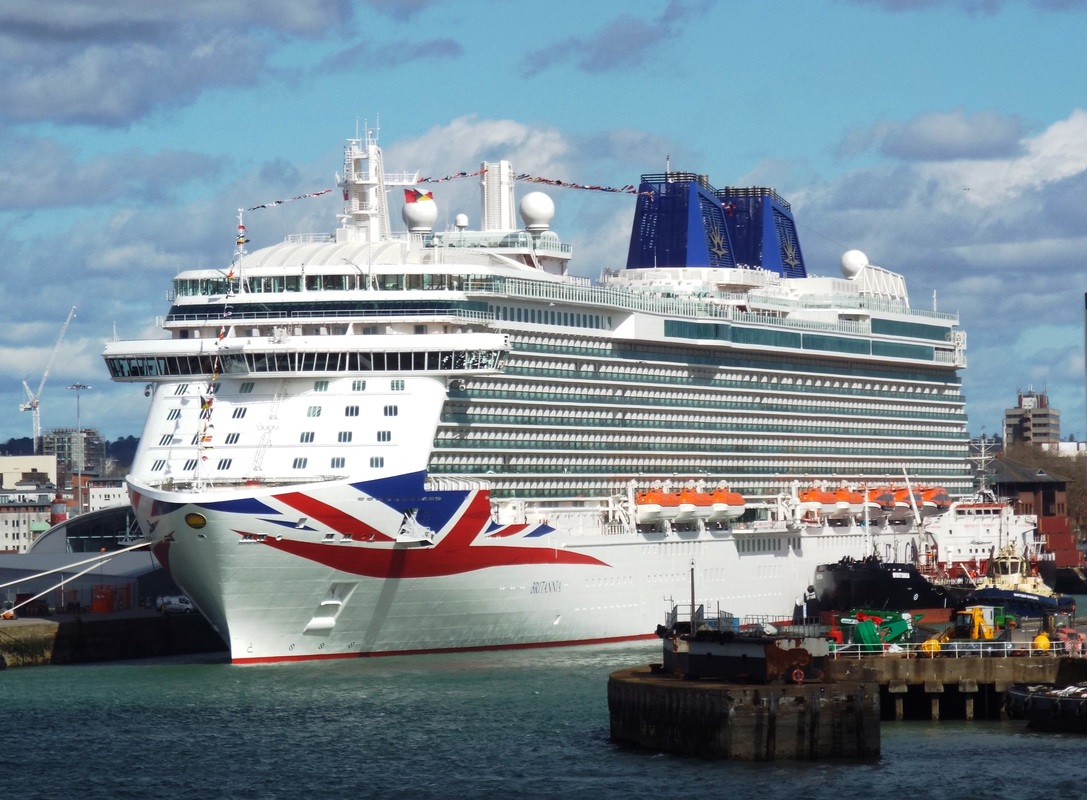 Britannia photographed in Southampton on 11 April 2015.

Owned by Carnival and operated by P&O Cruises she was ordered in 2011 and laid down on 15 May 2013. Built in Italy by Fincantieri she departed the shipyard on 27 February 2015 for Southampton where she was officially named by Queen Elizabeth II at the Ocean Terminal on 10 March 2015.

Powered by twin Wärtsilä 12V46F & 14V46F & propulsion electric motors she has a top speed of over 21 Knots.

Veteran cruise ship Horizon photographed in Liverpool on 22 July 2015. I took the photographs from my phone as I walked along the riverside to a late afternoon meeting at Princes Dock.

Her service with Celebrity ended in 2006 when she was transferred to Island Cruises. The ship completed a refit in 2006 and in 2009 was sailing in Pullmantur colours as Pacific Dream. In 2010 she was renamed Horizon and operating for French Cruise line Croisieres de France

She can carry 1828 passengers 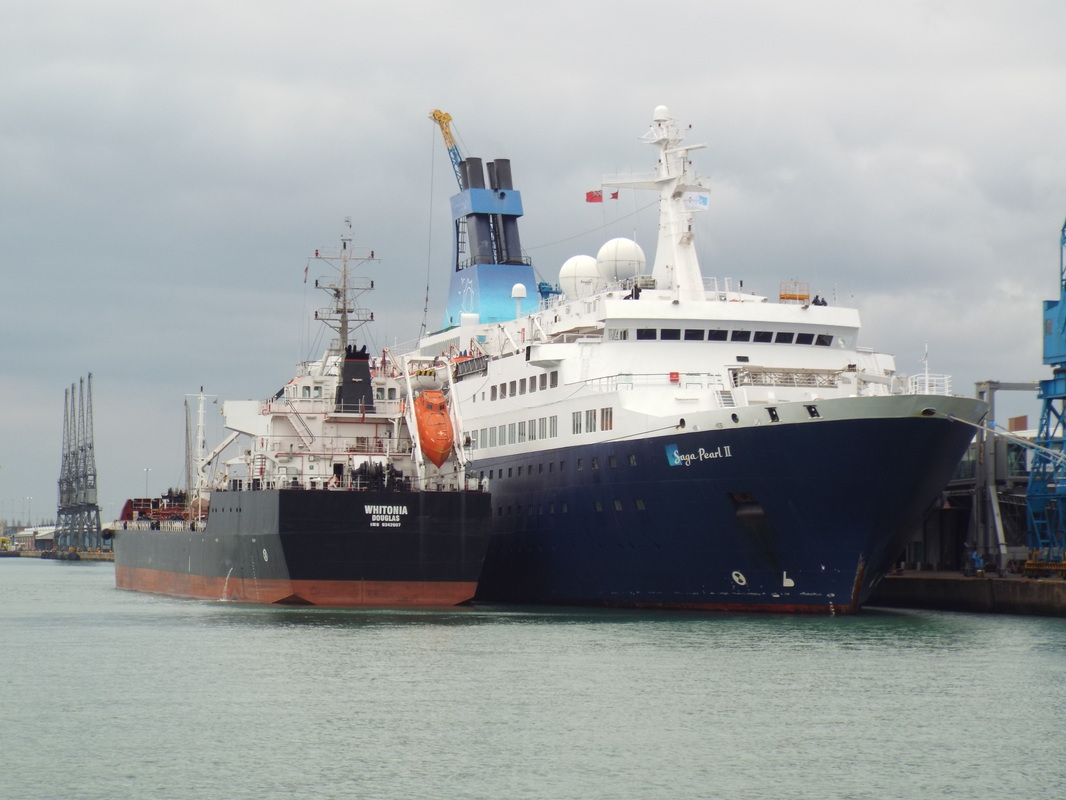 She was built in Germany by Howaldtswerke as yard number 165. Laid down in February 1980 she was completed in December 1981, she was ordered by the German Company Hadag Cruise Lines but was quickly sold to South African Company Safmarine.

The cruise ship has capacity for a maximum of 449 passengers and 220 crew.

I have been struggling to get to Liverpool recently and it was good that a meeting in the City coincided with her visit.

Originally she was built for Renaissance Cruises as R Seven but following the collapse of this Company in 2001 she was laid up for two years until being chartered by Delphin Seereisen and being renamed Delphin Renaissance. In 2006 she was sold to Pullmantur Cruises and sailed as Blue Moon until being acquired by Azamara where she entered service on 27 October 2007.

In March 2012 the ship suffered a fire in one of her engine rooms South of the Phillipines, a number of crew were injured although the fire was quickly contained. In November 2012 she had an eight day dry dock which in addition to a newly painted hull also resulted in new soft furnishings, a new steam room and a new caviar and champagne bar being installed

Azamara joined the cruise industry in 2007 after Royal Caribbean acquired Pullmantur, Celebrity Cruises who are part of the Royal Caribbean Group taking on the vessel. The line was however rebranded as Azamara Club Cruises in April 2010.

QUANTUM OF THE SEAS 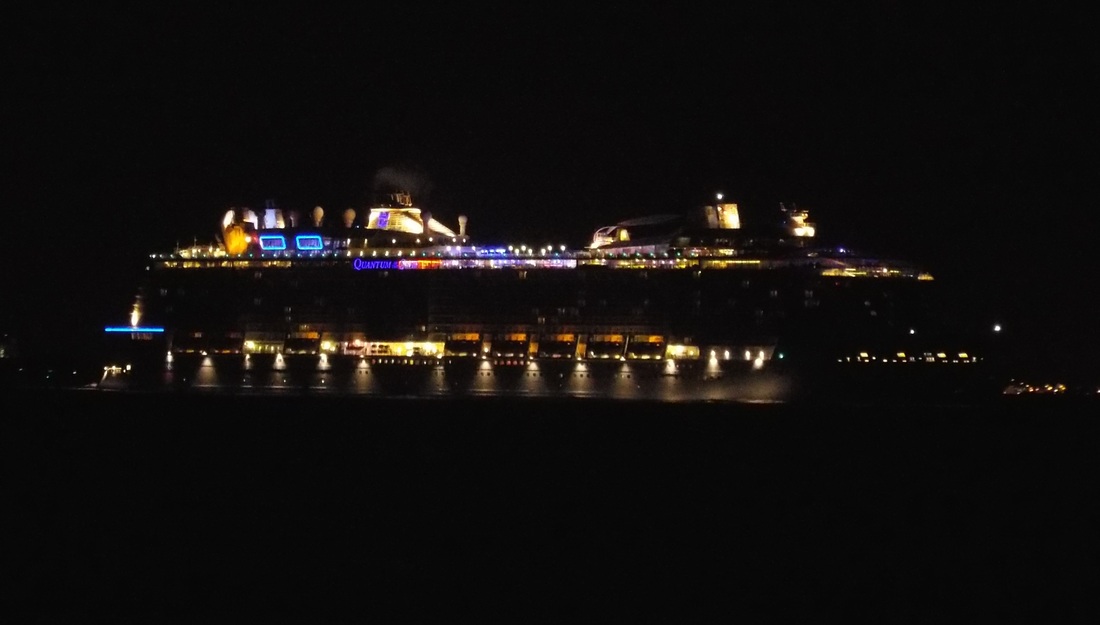 Royal Caribbean Internationals Quantum of the Seas photographed heading out to sea on 31 October 2014 from East Cowes. On what was a very cold but dry evening I was in a group of about twenty people who had ventured out to see her pass. Although she had arrived in Southampton a day or so before in advance of her maiden voyage on 2 November 2014 for some reason she headed back out to see on Halloween before returning in time to set sail with her first complement of passengers two days later.

She can carry a maximum of 4,905 passengers in 2,090 staterooms comprising 1,570 balcony staterooms, 147 ocean-view staterooms and 373 inside staterooms over 16 passenger accessible decks. 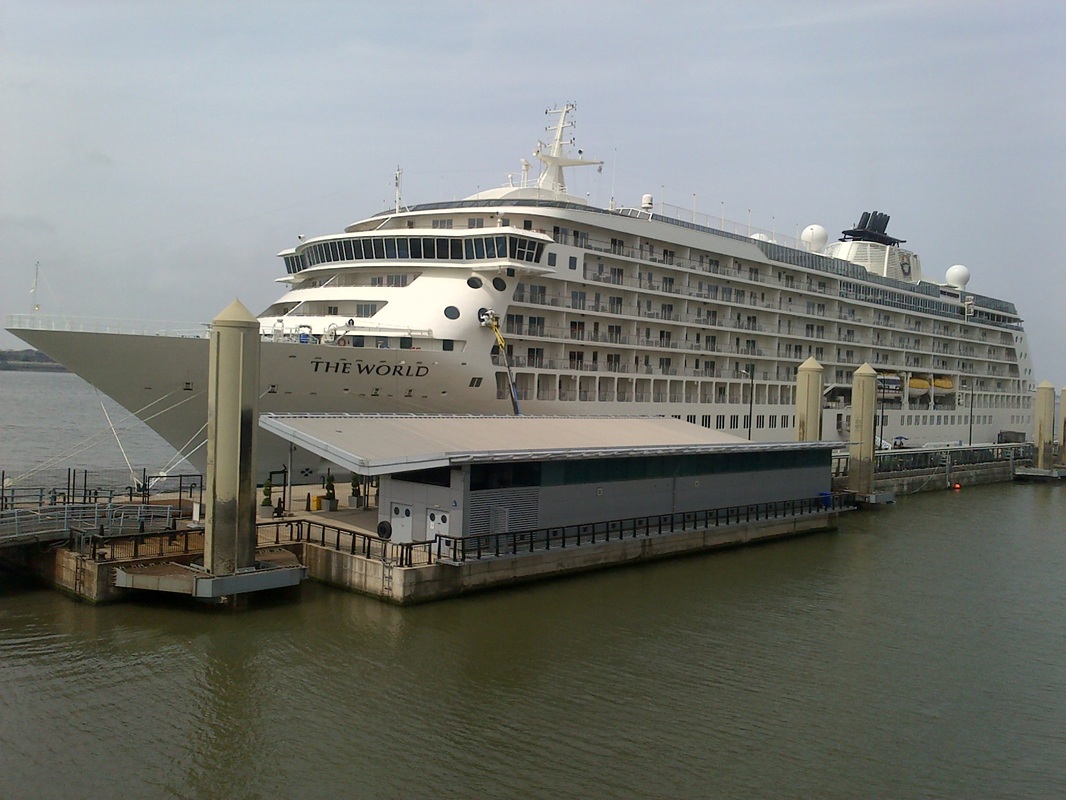 The World is a private residential community-at-sea where its Residents may travel the globe without ever leaving home. Since it first set sail in 2002, The World has visited over 800 ports in approximately 140 countries. With a
continuous worldwide itinerary that enables the vessel to span the globe every two-to-three years, the ship is a complete floating hotel, equipped with high-end facilities and  luxurious amenities that create an intimate, refined
atmosphere for Resident owners.

Knut U. Kloster Jr., the visionary behind The World, grew up in a family that was passionate about life at sea. After many years of working and vacationing on the world’s best yachts and cruise ships, Kloster had a dream to create a way in which travelers never had to get off board. As such, in 1997 he gathered together a team of experienced professionals and  began working on the first vessel where people could travel the globe without leaving home. Kloster’s dream was realized in March 2002 when he delivered The World in October 2003.

There are 165  Residences aboard ranging from studios to expansive three-bedroom units and a palatial six-bedroom penthouse suite, which boasts accommodations for up to 12 people.

Facilities on board include a spa and four major  restaurants.