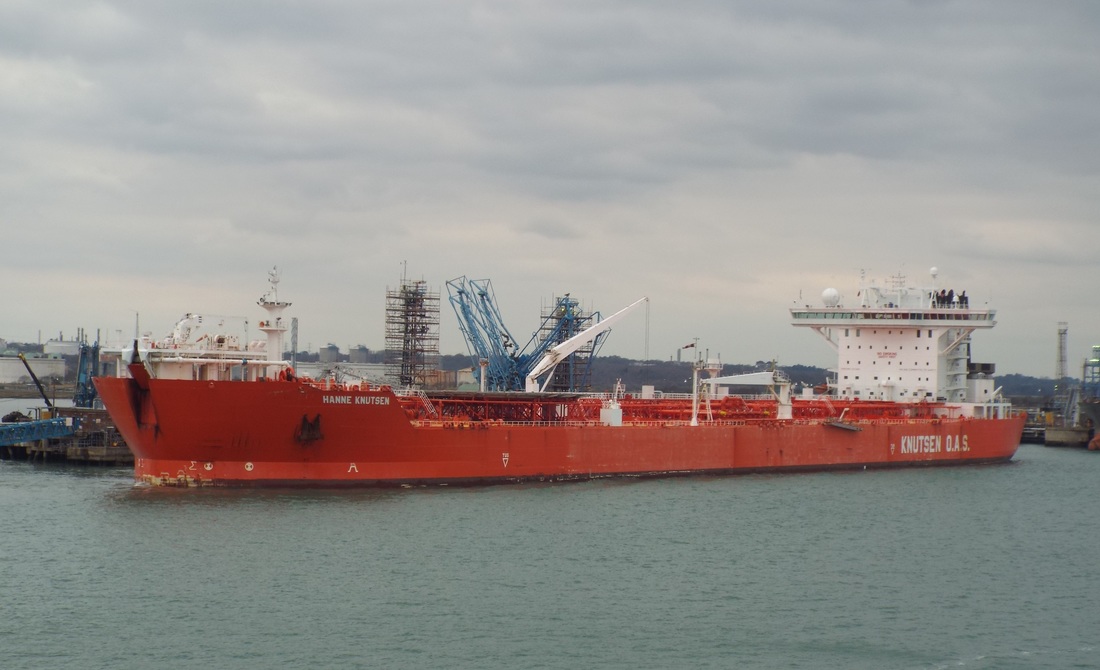 She is managed by KNOT - Knutsen Oas Managagement AS and owned by KNOT FSO 1 AS.

She has had a number of previous owners.

Lined up at Fawley In the company of Frank, Philipp Essberger and Houyoshi Express II. 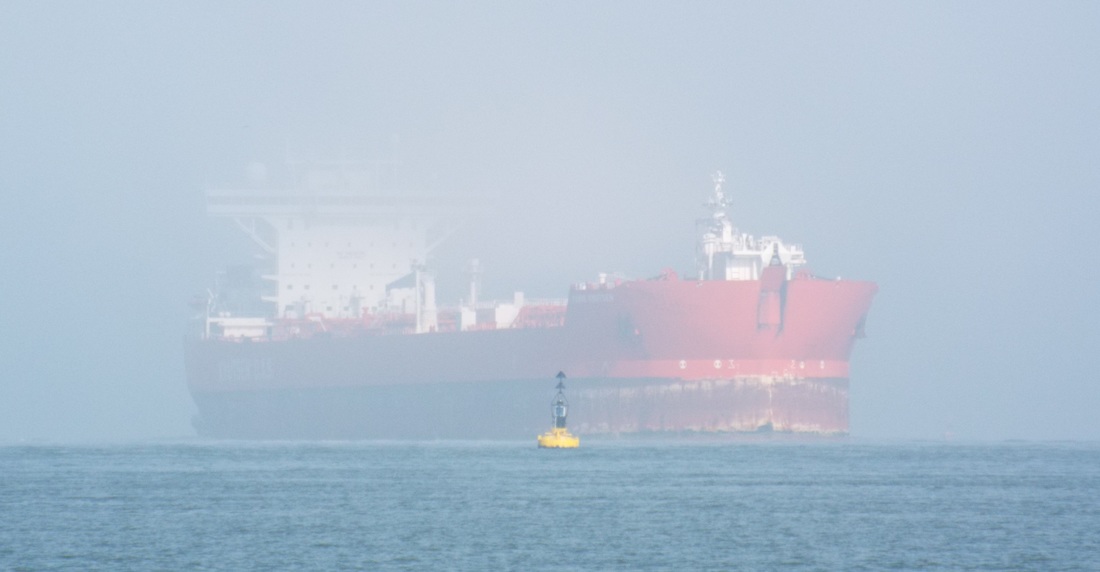 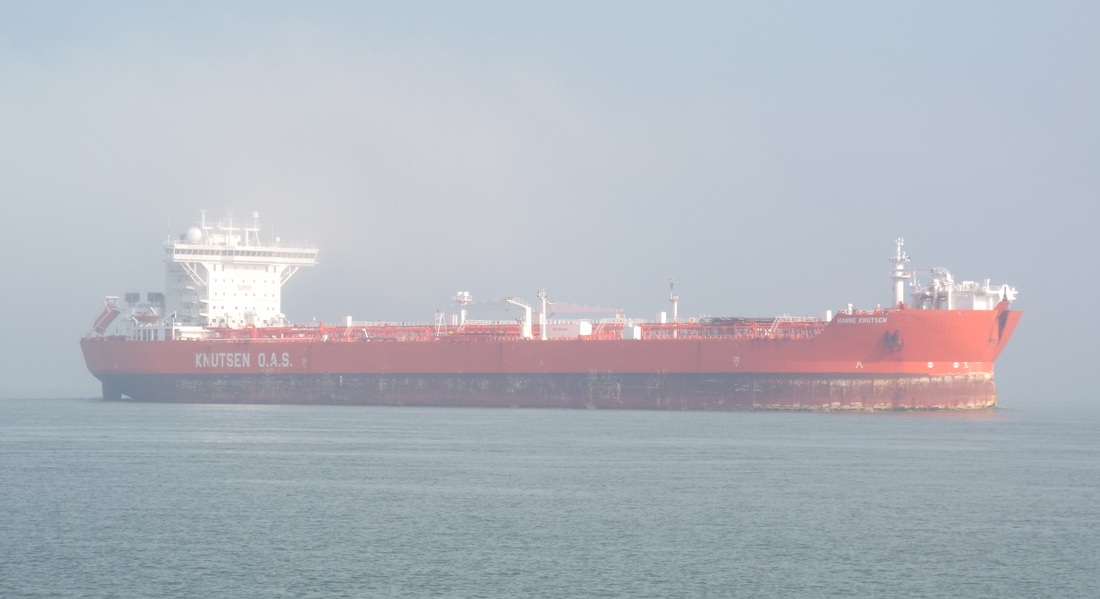 Hanne emerging from the early morning mist and passing me at the end of the esplanade in East Cowes a few days after I photographed her at Fawley. 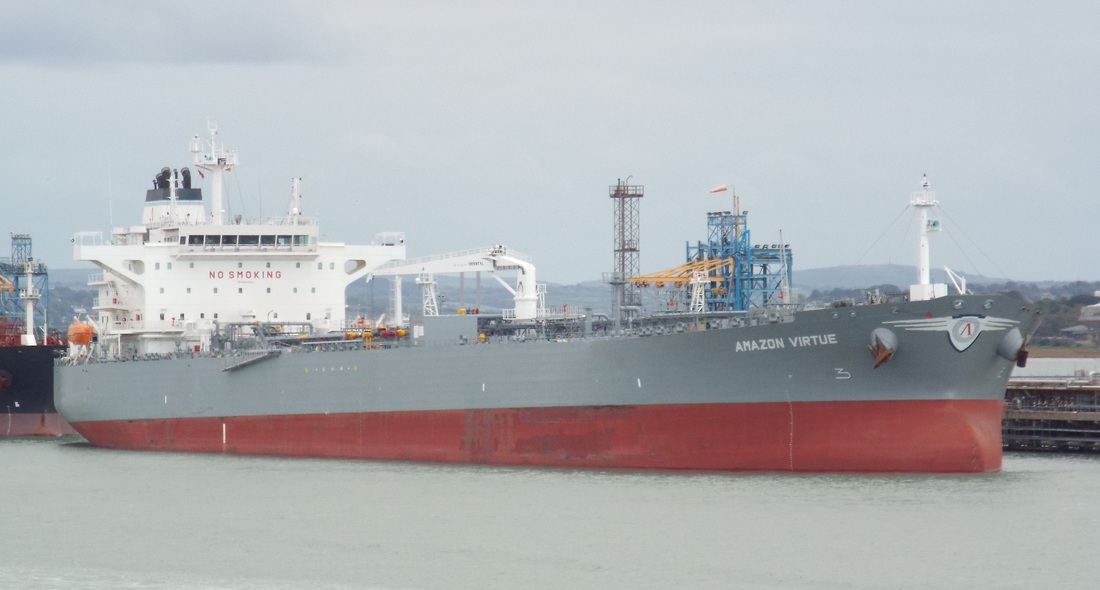 She is powered by a B&W / Hyundai 5G60ME-C Diesel Engine.

She is operated by Sun Enterprises which was established in Piraeus in 1968 but with roots dating back to 1902 when the steam ship SS Theofano was acquired. The company served as a consolidated operating company for a fleet of bulk carriers and tankers. 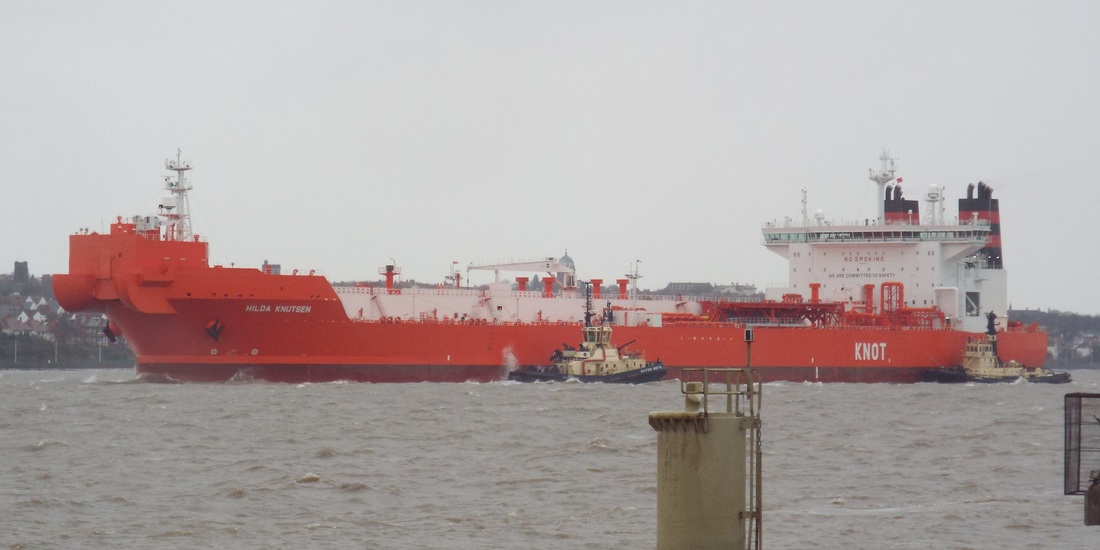 Crude Oil Tanker Hilda Knutsen photographed being assisted to her berth at Tranmere on 20 March 2014.

She is operated KNOT Management and owned by Knutsen OAS Shipping AS, the Company dates back to 1896 when
Knut Knutsen established a  shipping company in Haugesund, Norway. 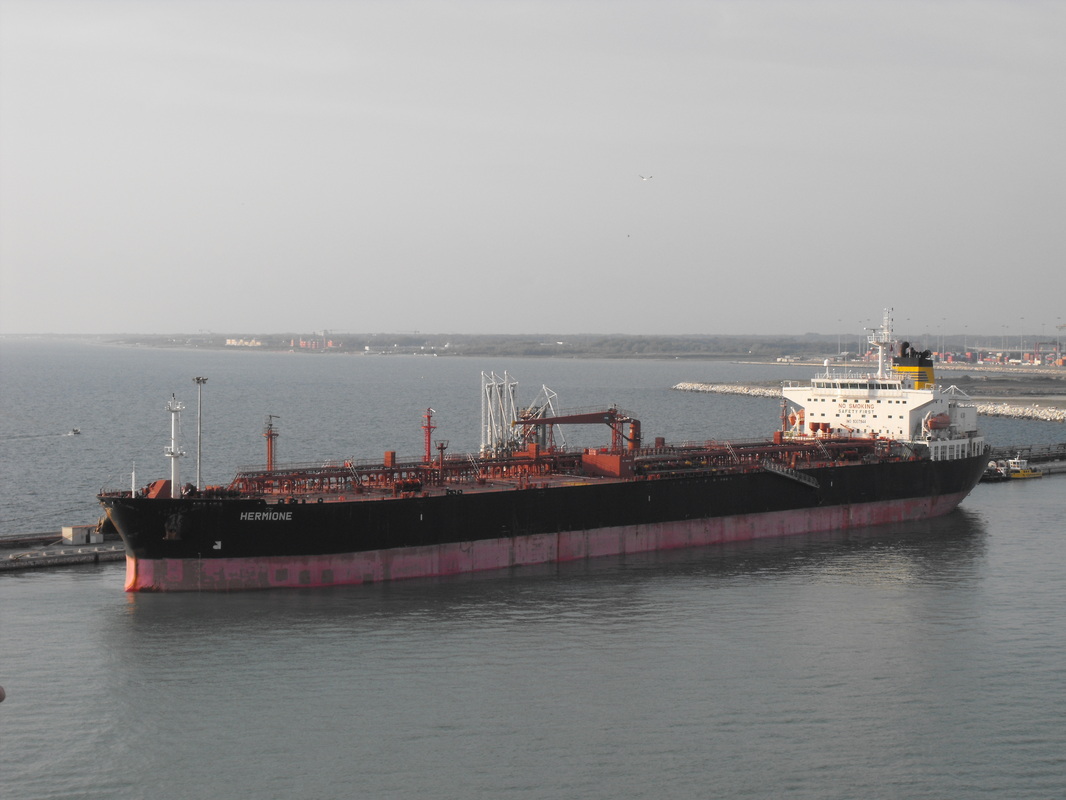 Photograph taken on 31 May 2012 of the Crude Oil Tanker Hermione berthed against the sea wall in the Port of Livorno.

I took this photograph as we were heading out of port en-route to Civitavecchia.

Surprisingly she was only one of three Crude Oil Tankers I saw on my two week cruise around the Mediterranean, the other two were both anchored off shore at  Barcelona and I only saw these as we were sailing into port on the very last day of my holiday.

The vessel is noted as being managed by Searrland Management  Services Singapore. 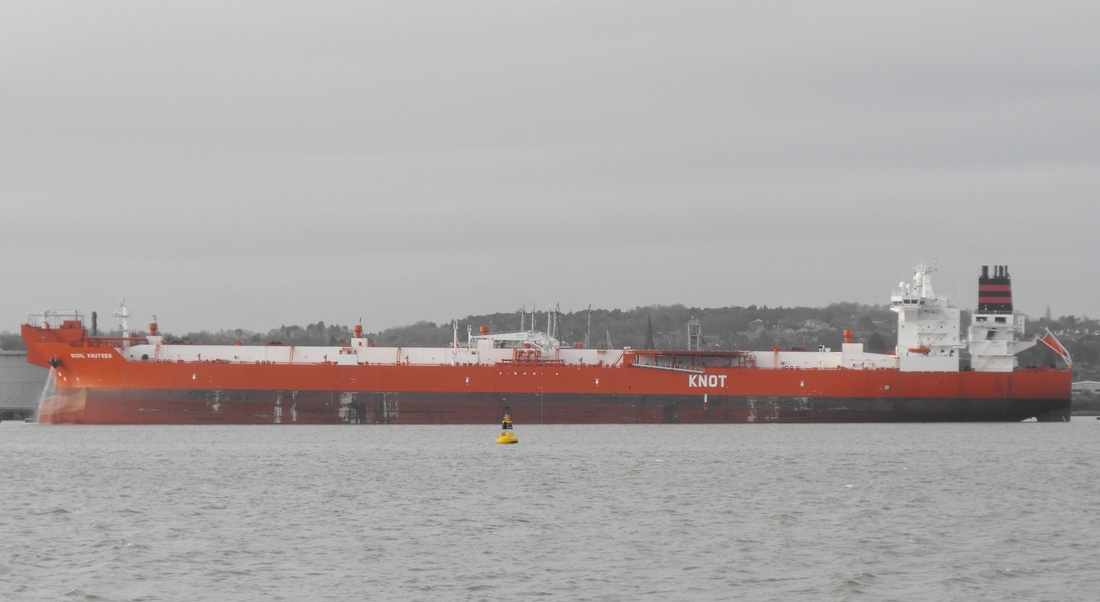 Operated by KNOT offshore a limited partnership formed to own, operate and acquire shuttle tankers under long-term charters of five years or more she is part of an initial fleet of four shuttle tankers contributed by Knutsen Offshore Tankers AS and Nippon Yusen Kaisha (NYK) a Japanese company with a fleet of approximately 800 vessels,
including bulk carriers, container ships, tankers and other specialized vessels.

Bodil Knutsen operates under long-term charters with major oil and gas companies engaged in offshore production such as BG Group, Statoil and Transpetro.

As a shuttle tanker she specialises in the transport of crude oil and condensates from offshore oil field installations to onshore terminals and refineries and is equipped with sophisticated loading systems and dynamic positioning systems that allow the vessels to load cargo safely and reliably from oil field installations even in harsh weather conditions. She is  based on a design developed in the North Sea in the 1970's as an alternative to pipelines.

Owned by Worldbridge Shipping Inc. the vessel is operated by the Arcadia Ship Management Co Ltd which was founded in 1998.

She is one of 4 Suemax and 10 Aframax tankers in their fleet all of which were built in South Korean yards.

Aframax Crude Oil Tanker Minerva Roxanne photographed in Liverpool on 29 July 2013, I was lucky enough to be walking alongside the river when she passed with assistance from local tugs on her way to Tranmere further up the river.

She is powered by a HSD MAN B&W (19460 BHP) Diesel Engine, the vessel is also equipped with a 15t crane and three centrifugal cargo pumps with a capacity of 2800m3/hour  per pump.

She is operated by Minerva Marine Inc who operate a fleet of product tankers, crude oil tankers and bulk carriers, they were founded in 1996 and are based in Athens.

Crude Oil Tanker Eagle Sapporo photographed at Tranmere on 9 May 2013.

The vessel was completed and handed over to Maybaru Shipping & Trading Pte Ltd, Singapore on 10 December 2008.

The vessel is one of 13 Aframax Tankers in a fleet of approximately 87 different vessels operated by MISC. MISC were incorporated in 1968 as a venture between the Malaysian Government and a group of private entrepreneurs. 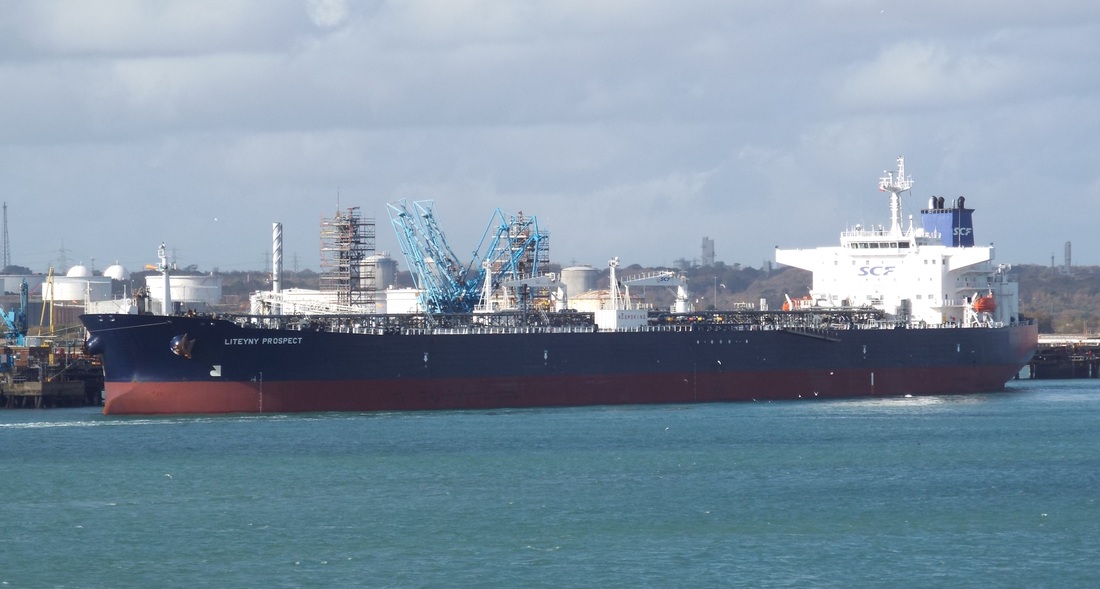 Liteyny Prospect photographed on the Solent early afternoon on a cold 1 November 2014.

Built by Daewoo Shipbuilding Marine Engineering in 2003 she is 249m long with a 44m beam and 14.8m draught.

She is part of the SCF fleet, this is an all-union commercial foreign trade association “Sovcomflot” which was re-formed as a joint-stock commercial enterprise in 1988. Sovcomflot is Russia’s largest shipping company and a  leader in the maritime transportation of hydrocarbons as well as the servicing and support of offshore exploration and oil & gas production. The company’s fleet (owned & chartered) specialises in hydrocarbon transportation from regions with challenging icy conditions and includes 153 vessels with a combined deadweight of about 12.8 million tonnes. A third of these vessels have a high ice class.

Sovcomflot is one of the largest ordering customers of civil ship-building in the Russian Federation.

The company is registered in Saint-Petersburg and has representative offices in Moscow, Novorossiysk, Murmansk, Vladivostok, Yuzhno-Sakhalinsk, London, Limassol, Madrid, Singapore and Dubai.