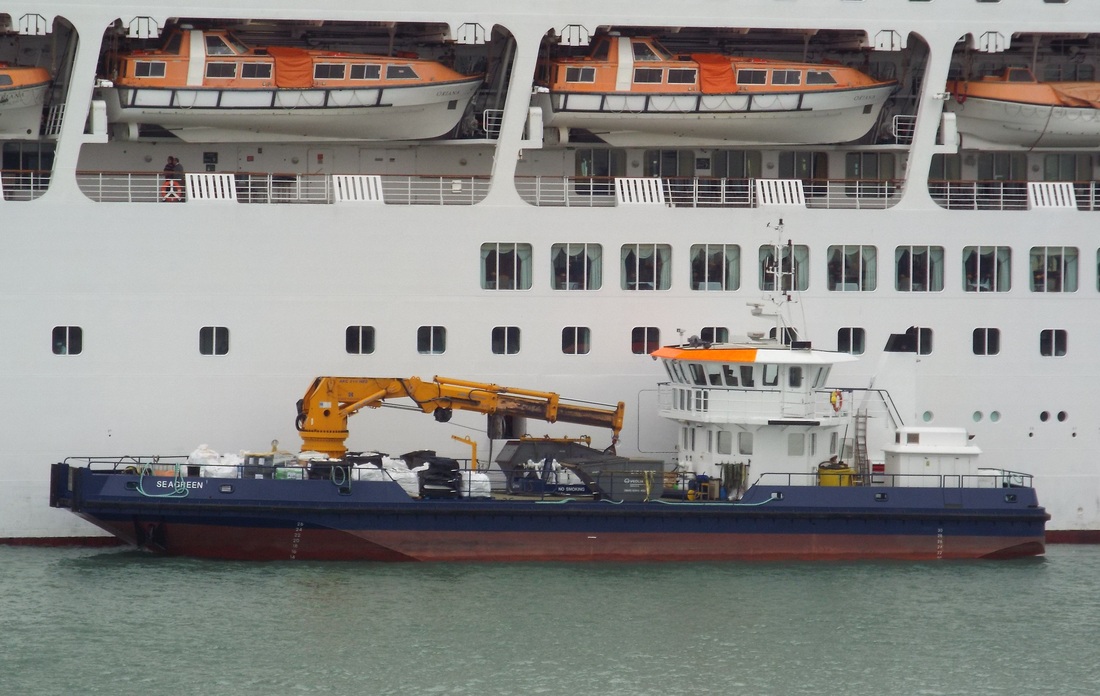 Seagreen photographed in Southampton alongside the Oriana on 4 April 2015.

She is owned and operated by Veolia Environmental Services and is based in Marchwood on Southampton Water.

Her role is to remove and recycle waste from visiting ships. 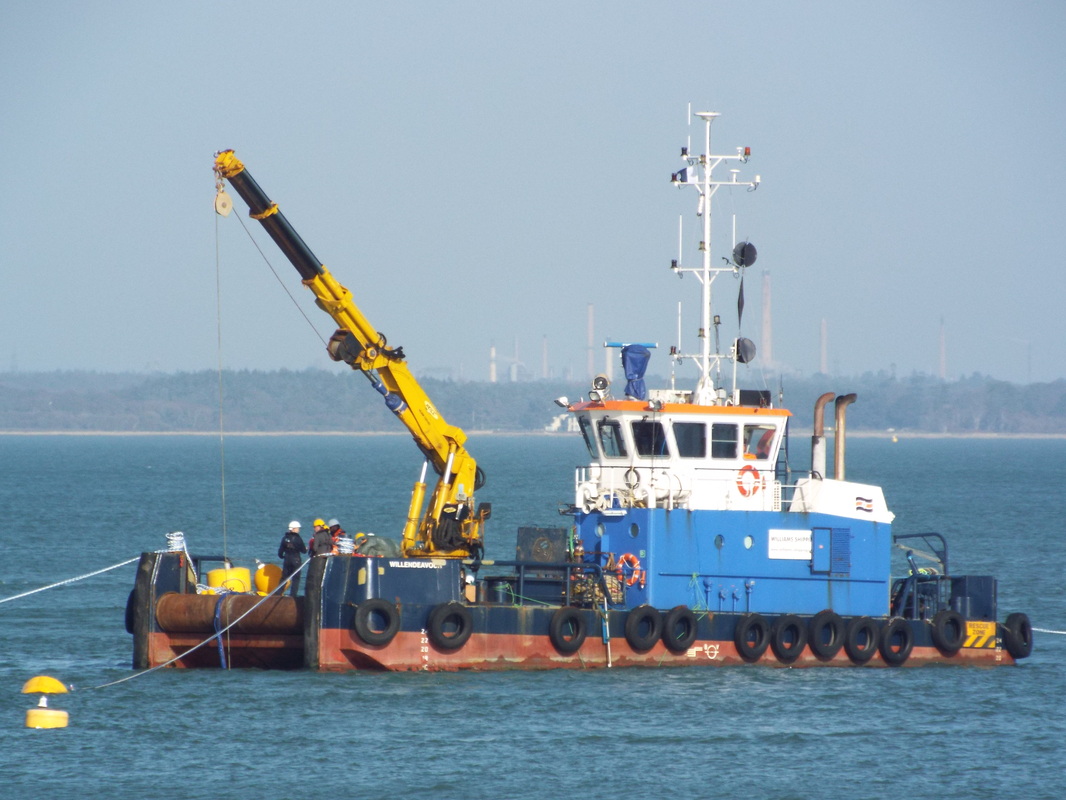 Multicat work boat Willendeavour photographed 31 October 2014 working just off the coast near Fort Victoria on the Isle of Wight.

Accommodation on board comprises an air conditioned wheelhouse, a galley, dry room and sanitary space. Two single person cabins are also provided together with a single two person cabin, workshop and store located below deck.

She is operated by Williams Shipping Marine who are based in Southampton and Pembroke, they have been trading since 1894. 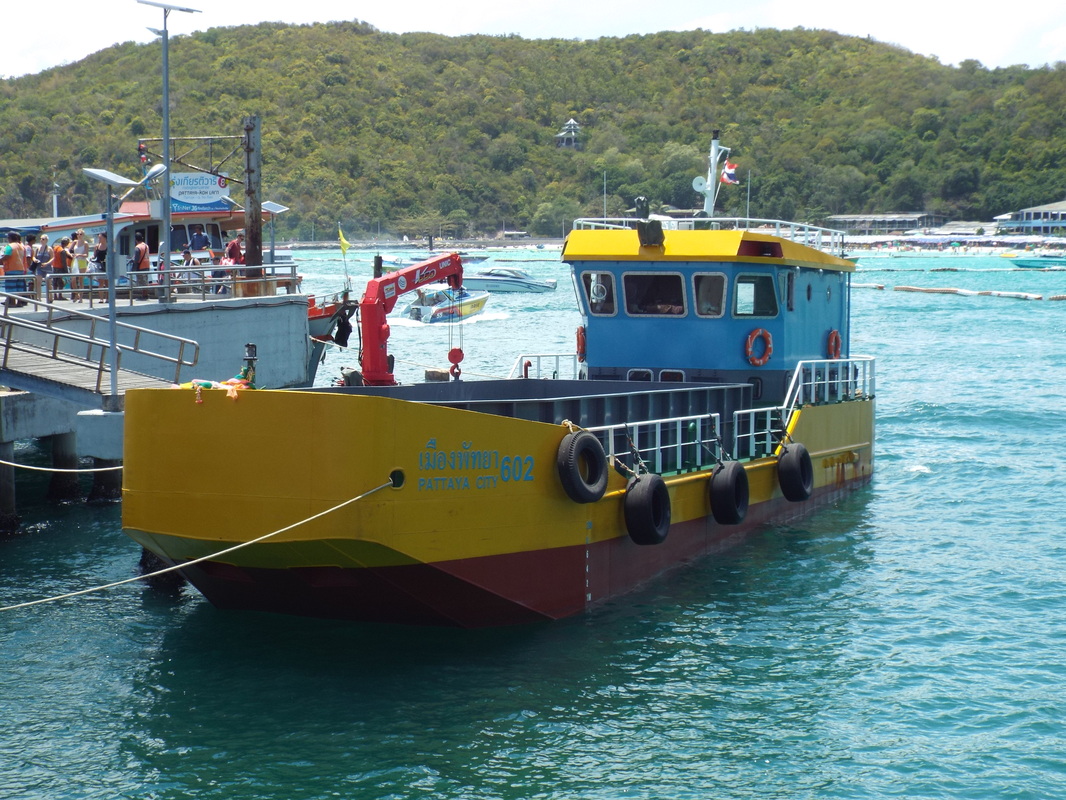 Work boat photographed near the end of the pier at Koh Larn on 22 August 2014.

Although she has a name I am struggling to find any details about her.

She looks very new and was probably only recently built.

I have seen a number of similar vessels in Thailand. This one appeared to be delivering building supplies to a small construction site at the South end of the beach. 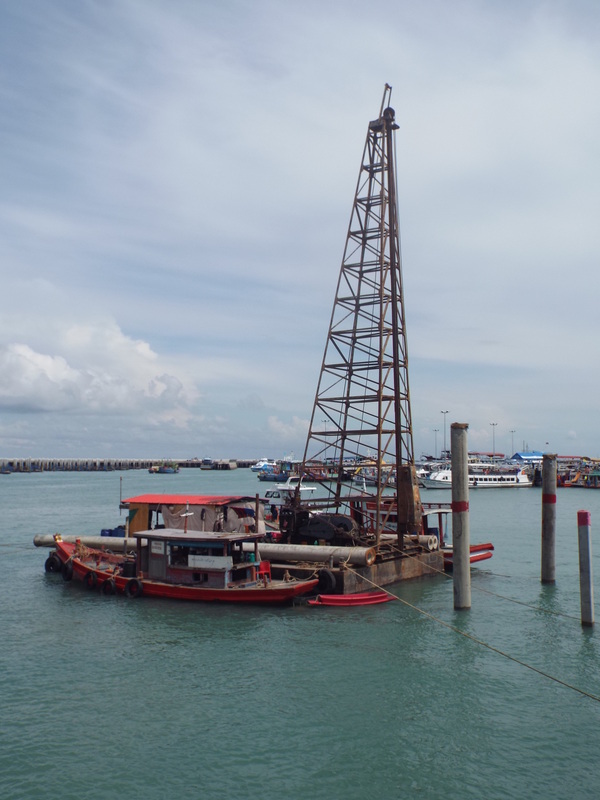 As far as I could see she had no name and may be just a platform which is manouvered and kept in position by the two small work boats on each side.

She looks nothing like the highly complex offshore vessels I sometimes see in Liverpool which are working on the new wind farm just off the North Wales coast.

Judging from the number of piles in the marina she must however be ideally suited to working there. 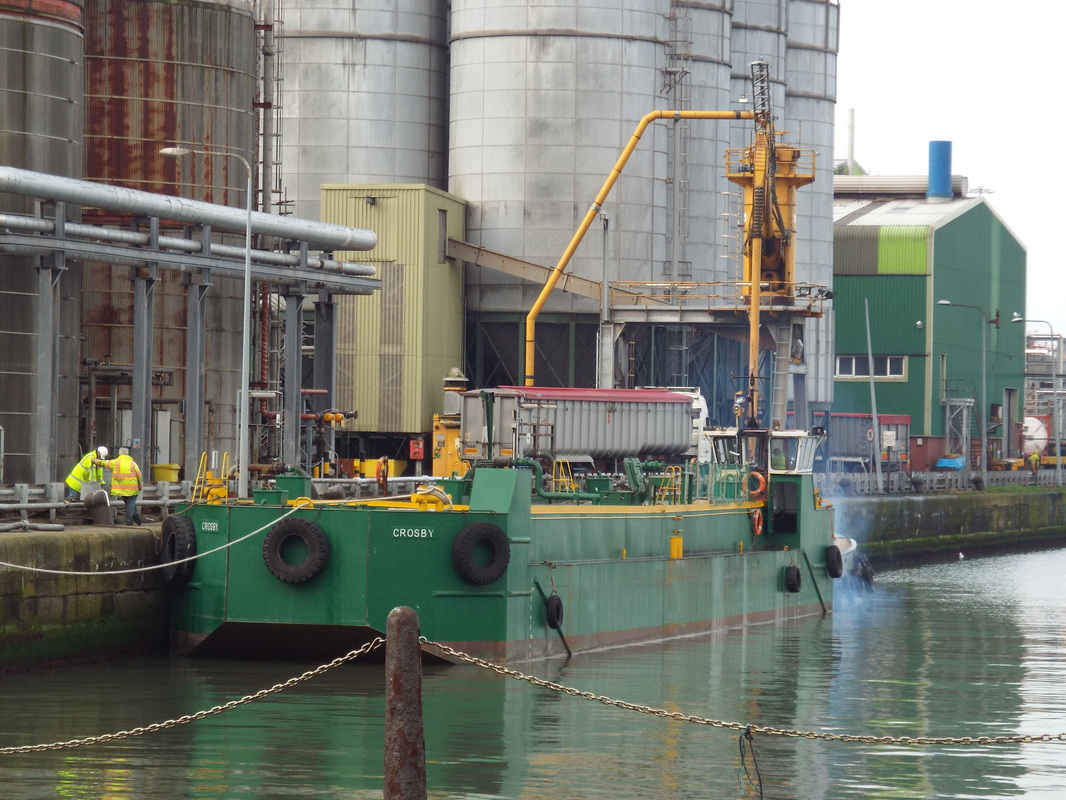 Crosby photographed hard at work in Liverpool docks on 28 March 2014.

She is a  purpose built tank barge with a capacity
approaching 500 tonnes and came into service in 2013.

She is owned by Mainmast who are a Maritime Logistics Company formed in November 2001.

They are based in Lincoln and operate a numberof edible oil motor tank barges both on the River Humber and in Liverpool. 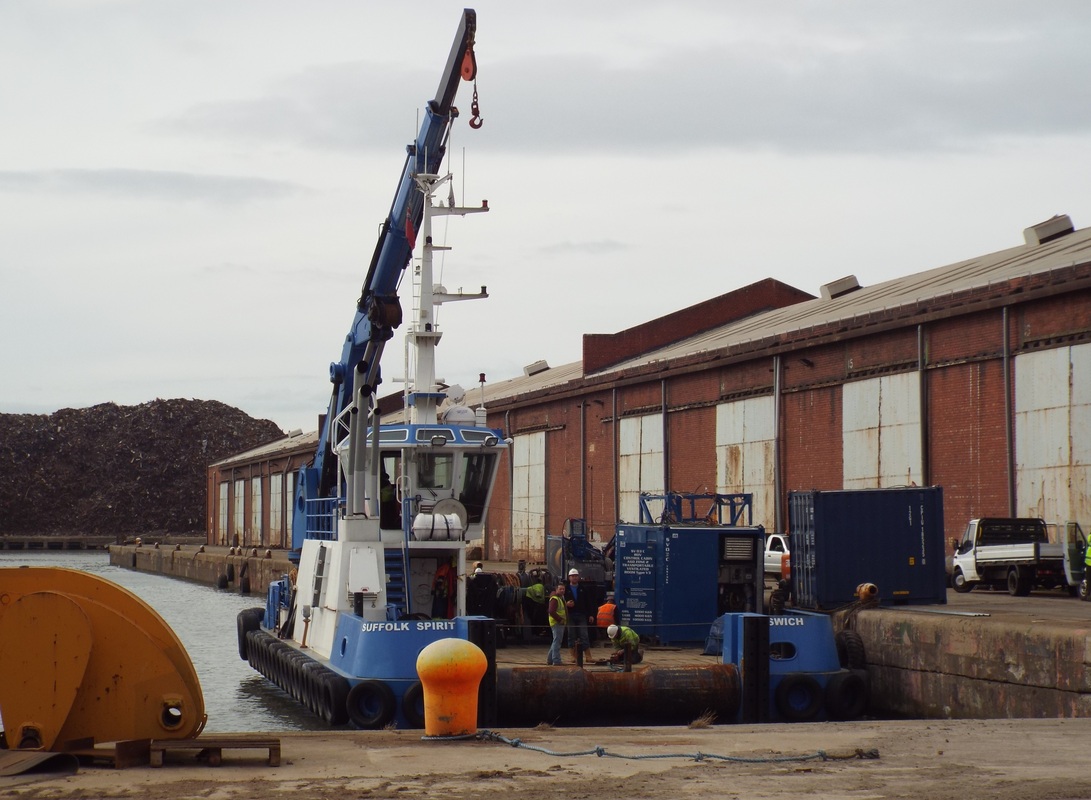 She has an overall length of 26m with a 10.4m breadth and 3.35m draught which decreases to 2.6m when the vessel is fully loaded,

Her deck has a cargo capacity of 70t.

Powered by two Doosan engines (800hp at 1800rpm) with twin 1700mm propellers in nozzles she has a service speed of 10 knots. A Doosan Auxiliary engine (350hp) and 86kw generator are also provided in addition to a Kort KT170  bow thruster.

She was designed by MacDuff Ship Design who are Naval Architects / Marine Consultants based in MacDuff, Aberdeenshire, Scotland.

The vessel was built and fitted out in two half's (port and starboard sections) in the Ipswich factory of Kocurek Excavators before being transported by low loader to Shotley where the two sections were welded together on the beach. She entered the water overnight on the 17/18 April 2012 and completed sea trials later the same month.

Deck equipment includes a 200t crane and accommodation is provided on board for six crew in three twin berth cabins together with a galley and mess room.

She is designed for towing, dive support, anchor handling, support operations and a variety of other roles.

Suffolk Spirit is operated by Shire Marine who are based in Ipswich. 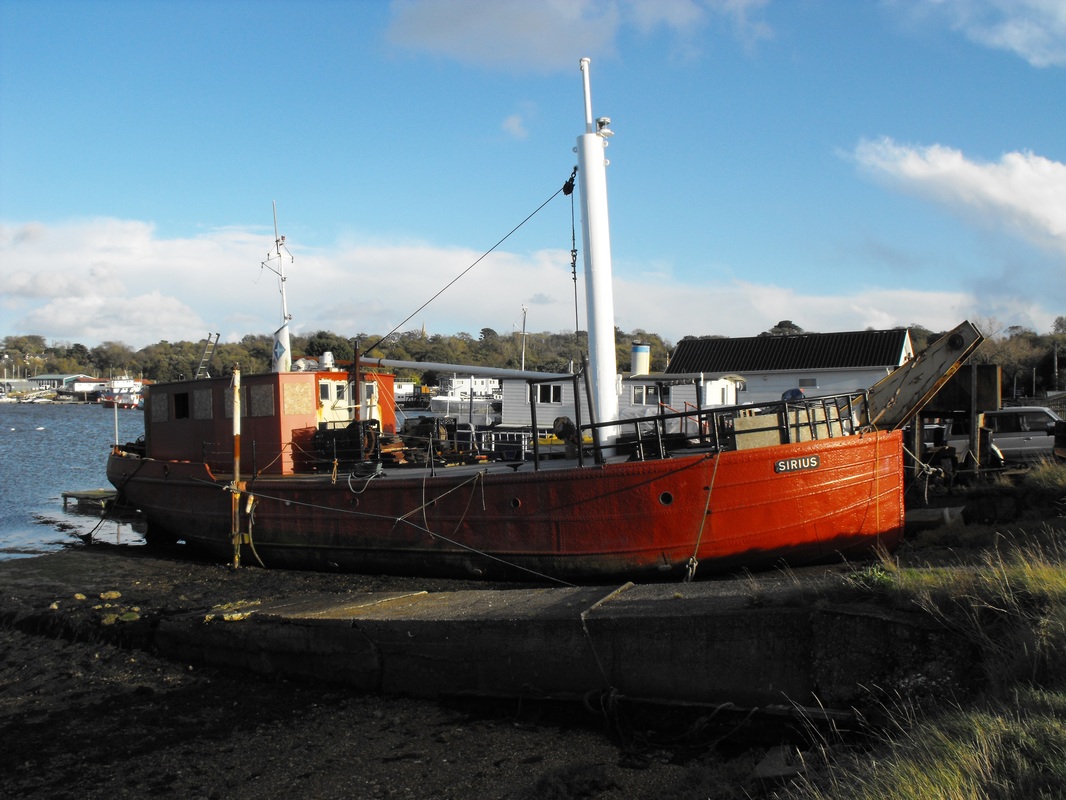 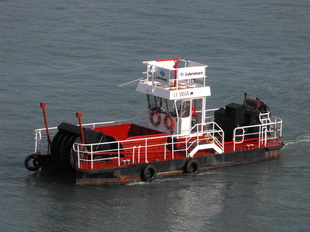