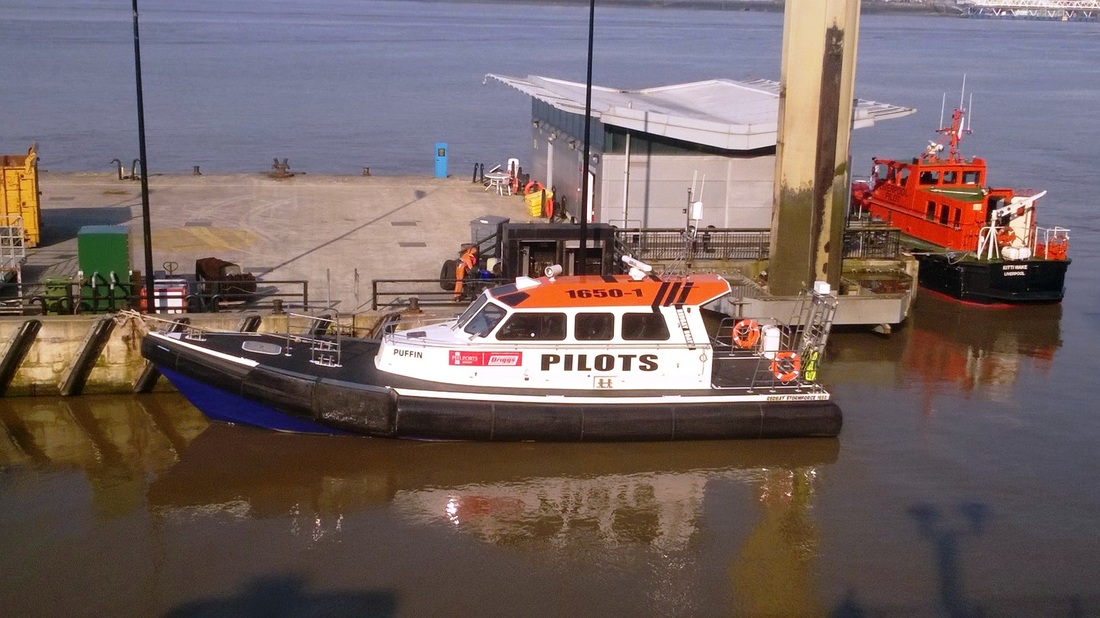 Pilot vessel Puffin photographed in Liverpool on 12 May 2016.

She is a new vessel that I have not seen before and was moored alongside the pilots headquarters for much of the day.

She is a Redbay Stormforce 1650 which have a glass reinforced plastic deep-V hull, with foam filled collars bonded to the hull sides.  The 1650 is intended for a variety of commercial applications including Pilot, Patrol, and Passenger carrying usages.

She was built by Redbay boats who are based in Cushendall County on the North East Antrim Coastline, they started building specialised traditional wooden-clinker fishing boats in 1977.
Liverpool Pilot Vessl Turnstone photographed alongside HMCS Iroquois on 25 May 2013. Built by Safehaven Marine she is the second new Pilot Interceptor 48 vessel built for the Port of Liverpool and was ordered in February 2012.

Turnstone is the 5th of  Safehaven Marines Interceptor 48 pilot vessels to enter service in Ports worldwide and is the 25th pilot vessel built by them.

displacement. She has a seating capacity for seven pilots and two crew, air suspension seats are fitted in the cabin which is also equiped with a full galley. She is able to operate in very harsh conditions and 7m+ waves. Safehaven  are currently building an Interceptor 48 for P&O Maritime for operation in the Port of  Matubo, Mozambique, a Search and rescue vessel for the Faroe Islands and a SAR ambulance vessel for the Port of Chittagon in Bangladesh. 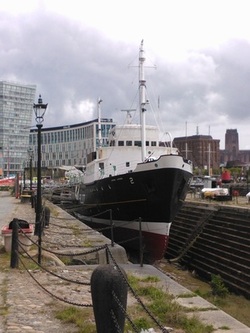 Located in a Graving Dock Number 1 just North of the Albert Dock, Liverpool is the Edmund Gardner which was built in 1952/1953 by Philip & Son Ltd of
Dartmouth. She operated as Pilot Boat Number 2 of a fleet of four pilot vessels introduced into service between 1937 and 1958.

The Mersey Docks and Harbour Board ordered her in July 1951 as the second of a new generation of large diesel-electric powered cutters to replace the pre-war steam cutters. She was launched 9 July 1953 and handed over 2 December 1953.  Built of riveted steel and powered by two six cylinder single acting 640bhp National diesel engines with a single screw she could make a speed of 14 knots.

Total build cost including a number of extra items was approximatly £211,000.  Most if not all of the vessels were designed by Graham & Woolnough of Liverpool and named after the Chairmen of the Board i.e. Sir Thomas Brocklebank, Edmund Gardner, Arnet Robinson and William M Clarke. Their role was to provide a pilot service to guide the steady stream of ships entering and leaving the Mersey and as such they could accommodate up to 32 pilots and 11 apprentice pilots together with a regular crew.

Approaching the Port of Liverpool due to sand banks, shifting sands and strong tides has since always been a
hazardous undertaking. In 1689 the first official chart of the Mersey was produced with a later version appearing in 1738.

Although charts made navigation easier, it was still precarious and local fishermen often acted as unofficial pilots / guides for vessels.The first official Liverpool Pilot Service was established by the Liverpool Pilotage Act of 1766 and resulted in the compulsory presence of a pilot aboard all vessels in the Mersey. The 19th century witnessed the significant development of Liverpool as an international port and the pilots provided an essential service for ships both entering and leaving port as well as manoeuvring into and out of the docks.

The cutters worked on a rota of one week on station at the Mersey bar, one week on station off Point Lynas and one week serving as supply boat and tender to the boats on station. Edmund Gardner carried out these duties until 1981 when the two remaining large cutters were withdrawn from service and replaced by smaller high speed launches.

She was bought in 1982 by the Merseyside Maritime Museum and maintained afloat in Princes Dock, Liverpool being moved to her current location in Canning Graving Dock Number 1 in 1984.