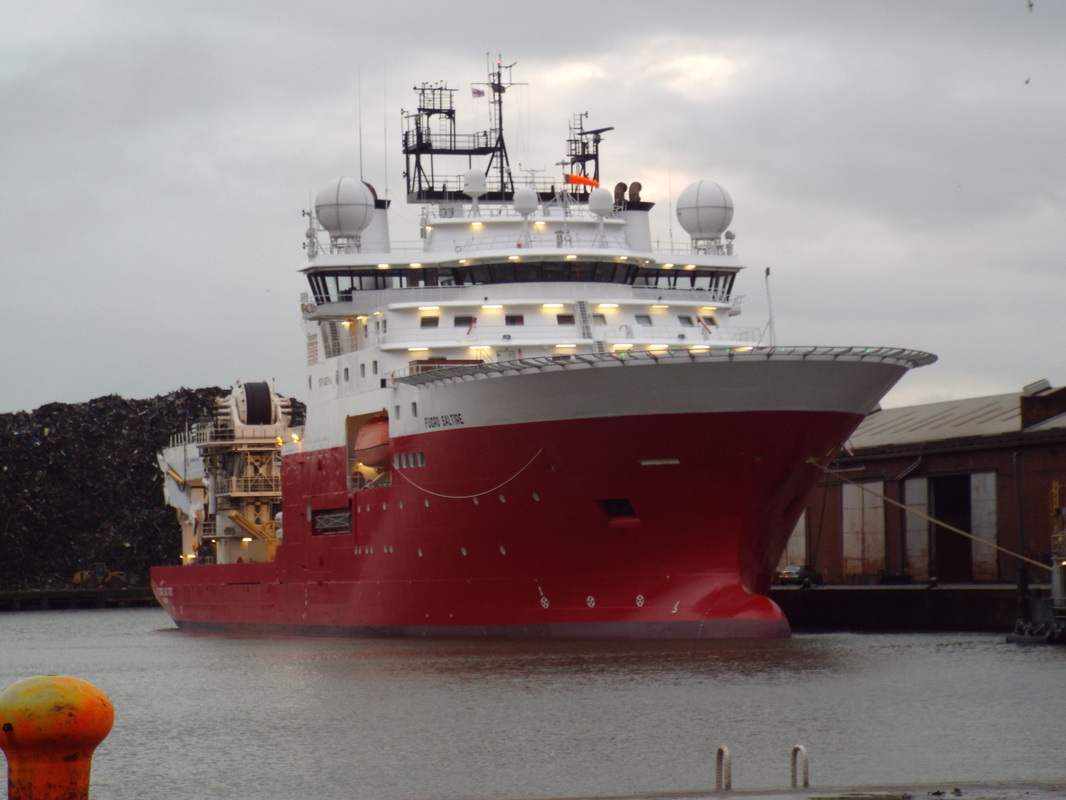 Sister ship of Fugro's Geo Celtic seismic vessel she was built by the Bergen Mekaniske Verksted shipyard in Bergen, Norway as Yard Number 61 in 2008 and is based on the Foland Ship Design.

Owned by E Forland AS she is under long term contract with Fugro Subsea Services.

The ship is equipped with four Rolls-Royce Bergen Diesel Engines (15,750KW) and two auxiliary engines driving
Marelli Generators. The bow is equipped with one retractable 1,400kW Azimuth and two 2,000kW Brunvoll tunnel thrusters, there are also two 1,400kW Azimuth thrusters at the stern. Cruising speed of the ship is 16 knots with an endurance of between 60 and 90 days

She is also equiped with a Hydramarine 150Te AHC knuckle-boom crane designed to deploy a payload down to
3000m in addition to a Hydramarine10T auxiliary subsea crane able to reach 1,000m below sea level.

Two Fugro FCV3000 150HP ROV's can be deployed via hydraulically operated doors on either side of a central ROV hangar. A working moonpool measuring 7.2 x 7.2m with removable cover is situated immediately aft  of the hanger area overlooked by the deck operations room. 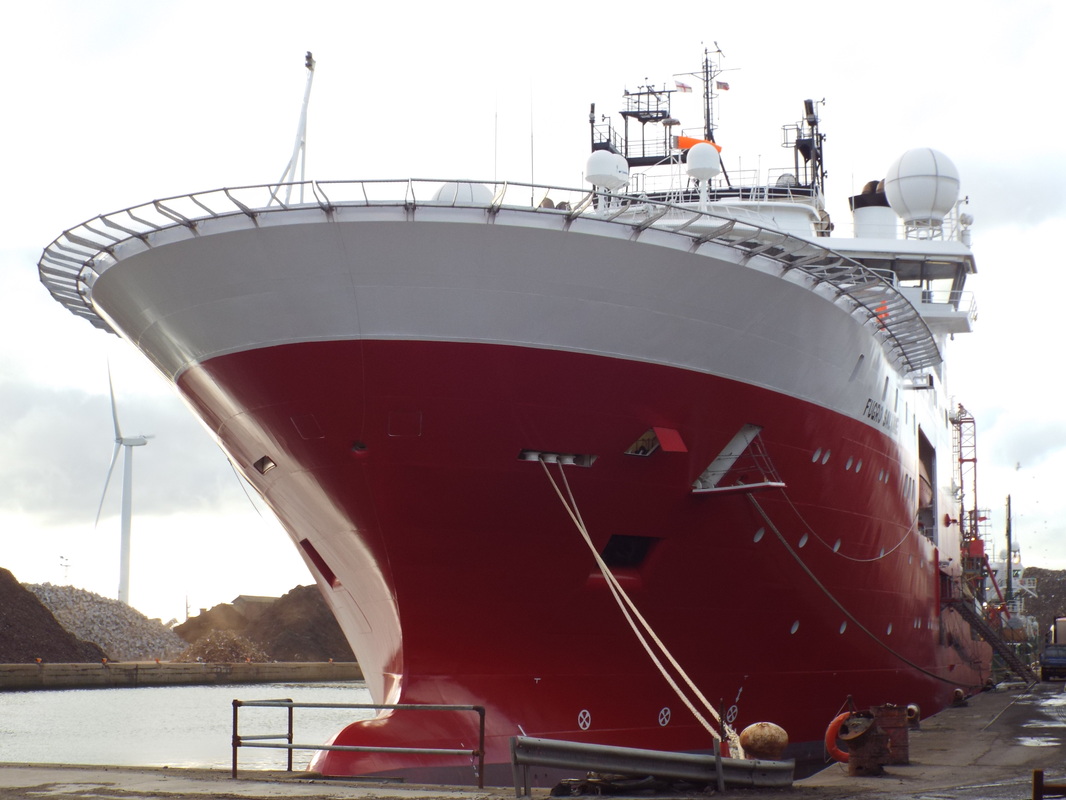 The vessel has a nominal deck area of 1,030m2 of which 960m2 is timbered with a designed deck loading of 10T/m2 enabling a  high degree of cargo and load flexibility. She also has a helideck designed to accommodate Sikorsky S61 / S92 helicopters with a maximum landing load of 12,800kg.

Fugro Subsea Services which is based in Aberdeen, Scotland specialise in providing ROV support vessels, trenching systems and remote engineering servicesprimarily  in the North Sea, Mediterranean and West Africa. They are part of the Subsea Services Group which operate Worldwide. 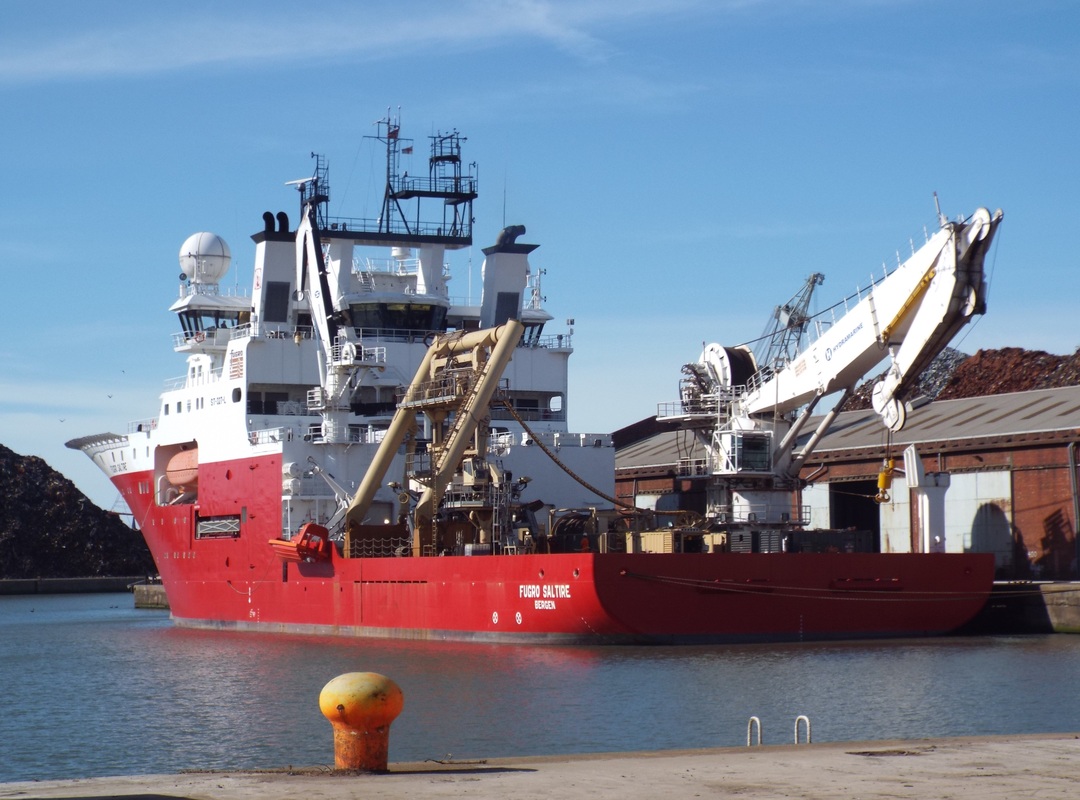 Photographed during her visit to Liverpool Docks on 10 March 2014. 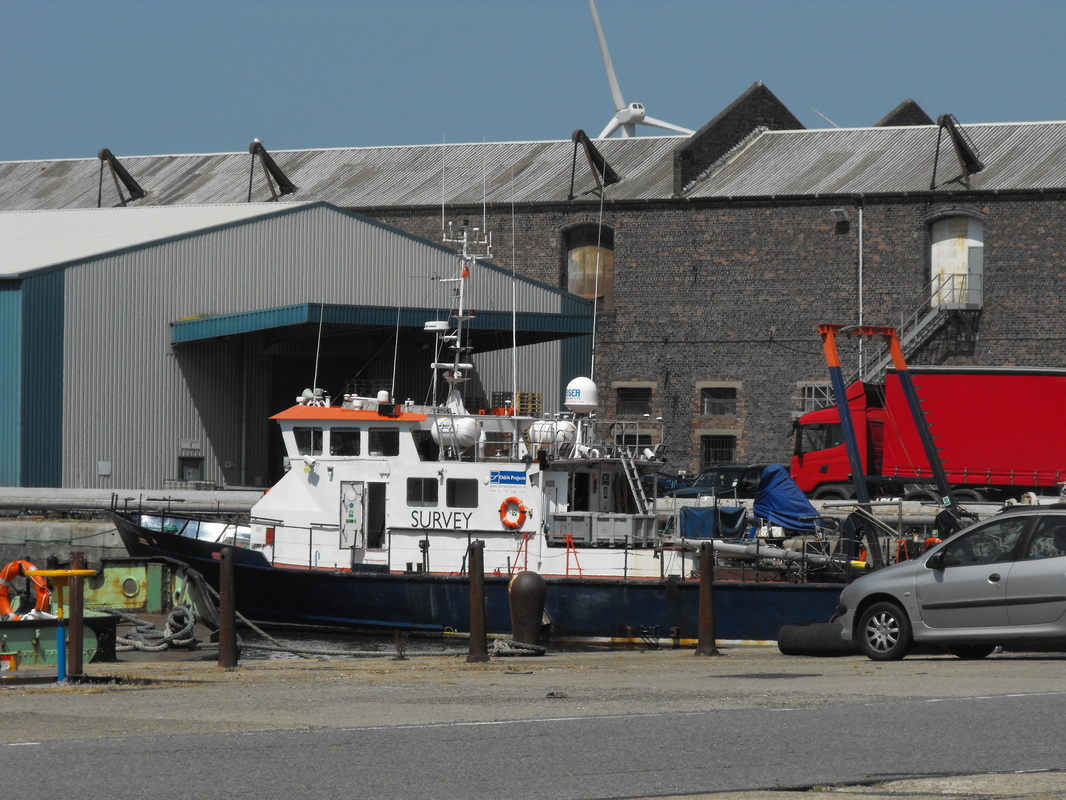 Chartwell is a research vessel and is here seen in Liverpool on 9 July 2013.

Built by McTay Marine on The Wirral Chartwell is a purpose built 106t dispacement mono-hull survey vessel which was
commissioned as a survey launch in 1989 and was extensively re-fitted in 2009 to enable her to undertake coastal geophysical survey operations.

She has a length of 26.5m, 5.8m beam and draft of 2.2m providing an efficient and stable working platform with secondary slow speed water-jet propulsion and automated line keeping facility. Her normal cruising speed is 15 knots..

The vessel provides round the clock operational capability for up to nine personnel for up to nine days at sea without replenishment. Accommodation is arranged into three twin cabins and three single cabins. There is a fully equipped galley and  mess area, shower room and separate WC below along with storage space and laundry facilities.

The on-line survey room is configured with easy access to the working deck and handling equipment with remote control of sonar winches, CCTV monitoring of all on deck activities with multiple monitors at each work station allow data display to be configured to suit various applications.

The main bridge has direct communication with the survey room and survey navigation displays are repeated on the bridge.  The rear working area is approximately 20m2 and incorporates access to the rear enclosed dive platform.

Other deck equipment includes a 6m hydraulic A-Frame with a SWL of 1 ton, hydraulic capstan, hydraulic side scan
sonar winch, hydraulic crane and purpose built over-the-side mounts for deployment of over side sensors.

Safety equipment carried on board complies with the MCA code of practice for Small Commercial Vessels (SCV Code) and is supplemented by a full complement of immersion suits. Chartwell carries Category 1 certification under the SCV code allowing her to operate up to 150 miles from a safe haven on a 24 hour basis. Two 10 man life rafts are carried on board. 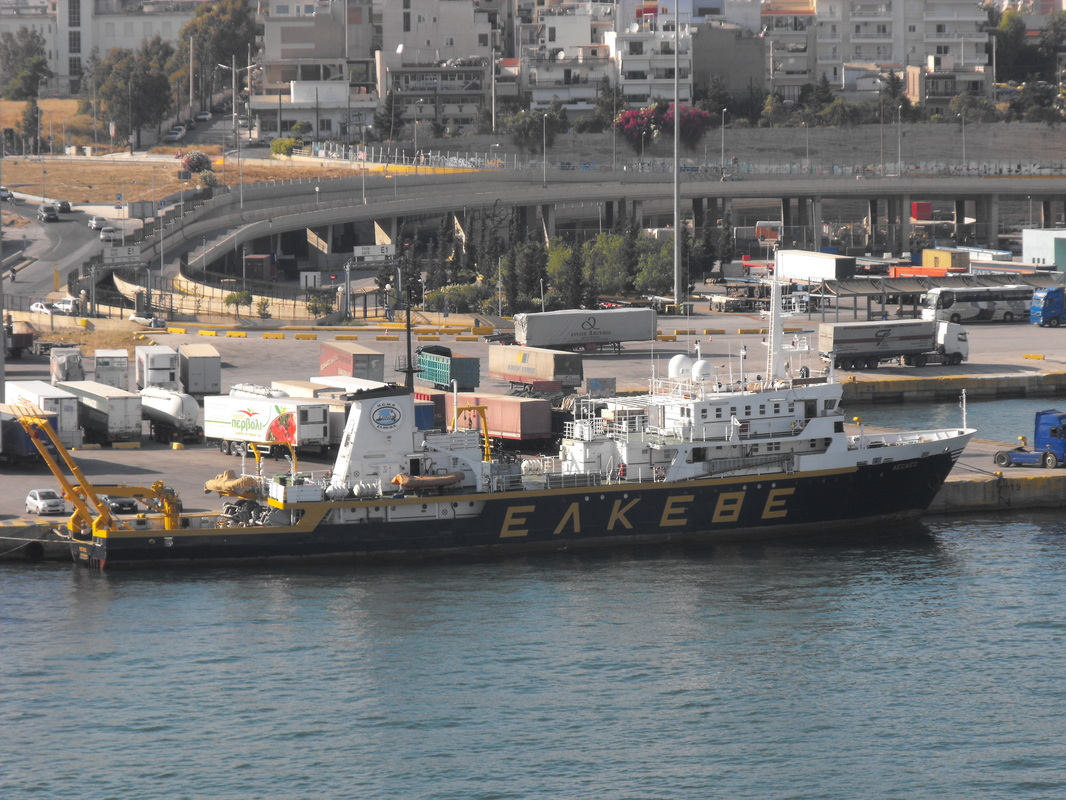 A photograph taken in Piraeus on 5 June 2012 of the research vessel Aegaeo.

She is certainly one of the larger research vessels I have seen, most of the others are much smaller and many have not had an IMO number so have not made it onto my list.

The Aegaeo is a multi-purpose research vessel which can carry out a wide variety of survey operations in offshore as well as deep sea locations, including acoustic and oceanographic surveys, buoy handling operations, environmental sampling as well as geological and hydro-graphic surveying.

The vessel can be equipped with a variety of ROV's as well as manned and un-manned submersibles. She also is fully equipped with a wide range of scientific equipment which can be supplemented by additional mobile equipment if required.

She is also equipped with a main 3.5 ton crane and a variety of other lifting devices.